Finally, we find out who's responsible for keeping Graig Cooper from looking like Rice Krispy Treats and Jacory appropriately swag'd thanks to Matt Wallach of The Miami Hurricane: it's team barber Steven Rivera of Get RIGHT Kutz. The only career Lance Leggett ever launched!

If you thought "U Swag" looked difficult, check the Ibis kut on Jordan Futch and Mike James' 863: 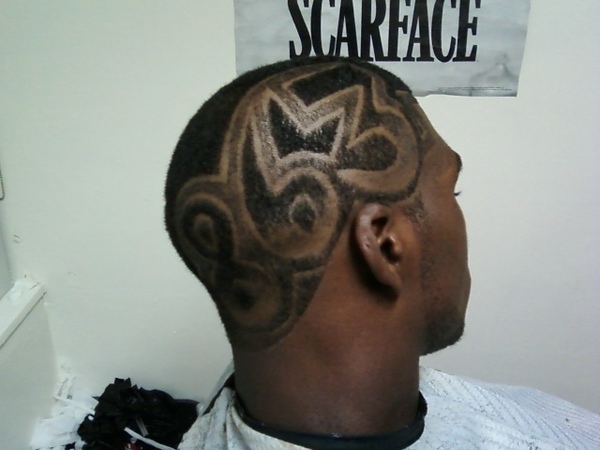 Fact: our team's barber is better than yours.

In ESPN's Week 6 Bowl Projections, both Mark Schlabach and Bruce Feldman have UM at the Fiesta. Schlabach says Ohio State, which would be nice, because holy hell I'd love to take that rematch. Even with one quarterback and half a defensive line out with injury.

The Miami Herald -- oh, excuse me: Bikini Bottom Times (no, it really does say that) -- officially kills all SpongeBob references with the stupidest thing ever written. As someone who specializes in writing pointless things, I know from bad.

More hair news, because we can: Jason Fox says the dreads make Travis Benjamin "look like Jar Jar Binks."  TB3 will no doubt counter with a link.

FAMU's halftime show included the spelling of CANES. Luh you back, Rattlers.