from here out, we're all fans of gimmicky run-heavy offenses and pissed off crazy asian kids

Share All sharing options for: from here out, we're all fans of gimmicky run-heavy offenses and pissed off crazy asian kids

according to espn.com's heather dinich, who   is as borderline bland on paper as she is borderline hottie in real life    actually takes the time to break this stuff down, the road to tampa goes through miami. unless v-tech is ranked within 5 spots of miami, in which case it goes through blacksburg. or something.

If it ended today, Miami would represent the Coastal Division in Tampa because of rule No. 7 in the ACC tiebreaker scenario -- the top-ranked team in the BCS Standings is the division winner, unless the second of the tied teams (in this case Georgia Tech) is ranked within five or fewer places. Miami is No. 10, and Georgia Tech is No. 12, but the Canes would win the head-to-head tiebreaker.

MIAMI: Win out and stay more than five places ahead of Virginia Tech in the BCS Standings OR have all three teams win out and have GT and Miami finish as the ACC's two highest rated teams so the Canes win the head-to-head battle.

for those that are still confused, TSF has created the following: 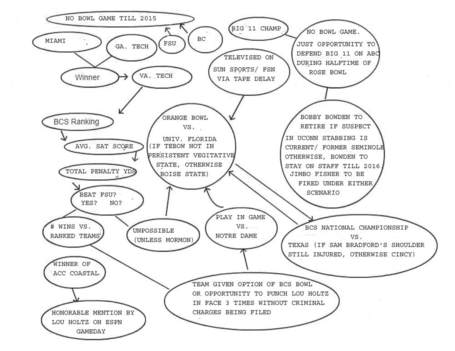