the new uni's have been leaked

Share All sharing options for: the new uni's have been leaked

those of you who pay attention to this sort of thing are already aware that miami (along with florida, texas, ohio state, florida state, tcu, va. tech., lsu and mizzou) have agreed to be guinnea pigs for nike by testing out new uniforms made of  military grade sham wow   stem cells from the children "employed" at nike's factory   some kind of new space aged technology designed to be lighter and more breatheable. the new material is also designed not to retain moisture and therefore should weigh significantly less (the new suits are said to weigh 37% - 46% less than their predecessor, depending on conditions). according to  the largest employer of taiwanese people under the age of 12  nike, the new uniforms will actually weigh less when wet, than the current uniforms weigh dry. the new get-ups also have strategically placed padding built into the thighs, hips, and tailbone, so as to provide greater shock absorption.

the canes will wear their new uni's for the first time on Nov. 28th against USF. florida, texas, ohio state, florida state, tcu, va. tech., lsu and mizzou will debut theirs over the next few weeks. a sneak peek at the other schools' new get-ups is after the jump.

finally, a very special shout out to all our internet hackers who made short work of nike's website in getting these out to us. apparently nike's plan to roll out one new uniform every few days over the next several weeks seemed just as f*&king retarded to you as it did to us.

UPDATE: more pics after the jump

(UPDATE: apparently this is the built in flack jacket. aaaaand with that, we will now return to our normally hetereosexual programming. ) 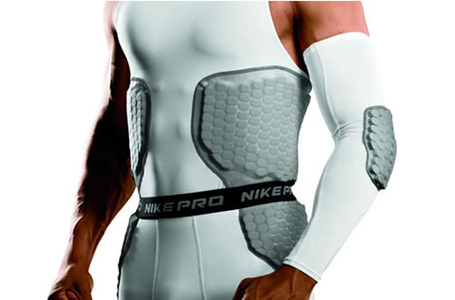