Share All sharing options for: stuff is happening in coral gables tomorrow night.

according to, like, credible sports journalists who dont make dick jokes and stuff, tomorrow night's "dinner on the diamond" ceremony is going forward as planned, with honoree alex rodriguez still scheduled to attend.

see back in 2002, you know, back when he was feeling an enormous amount of pressure and felt like he had all the weight of the world on top of him and needed to perform at a high level every day... arod gave like a buhjillion dollars to the U to renovate its crappilly awesome little baseball "stadium" on the condition that we rename the stadium in his honor... even though he dissed us to go pro.

the renovations are, like, finished or whatever. so now the U is honoring a-rod (pictured below with future hurricane QB coach ken dorsey and famed breakfast cereal pitchman "lucky" the lucky charms leprechaun) with some kind of banquet thing to be held out on the field. forecasters have called for temperatures in the mid 70's, partly douchey with a 75% chance of self-righteous media types and a possibility of drunken heckling later in the evening. depending on whether i'm feeling up to it. 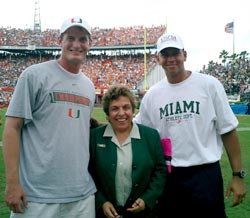