Like a doll's eyes.  Aside from former linebacker Brandon Marti joining Robert Marve in proving that we really, really, reeeeeeeally need to stop recruiting white guys, all of yesterday's news comes from Lovett's presser.  Lovett acknowledged the challenge of arriving 12 days before the start of spring ball, but said he's already hit the ground running and "all the kids I have met have exceeded my expectation in terms of how to present themselves." Team MVP Matt Bosher will shatter this illusion later when he uses his entrée fork to eat a salad, and suffers the humiliation of being shown to the door by the footman.

A couple things stood out from his talk, which you can hear in its entirety here:

[re: Shannon's input on defense] I'll do what he wants me to do, but as far as I know I'm running the defense. Obviously everything we do I'll run by him, especially if it's something different. I've worked for Tommy Tuberville, Butch Davis. Both those guys were defensive coaches. Neither really meddled in what you were doing. The big thing all of these guys want, including Randy, is they want to make sure what you're doing fits in their philosophy and that the kids are playing fast and hard.

...It'll be similar to what they've done here. We'll base out of a four-man front, play some zone coverage, man coverage, some type of pressure. It's not like we'll come in and change the whole scheme, be blitzburg. It'll be in that format and style. Every place I go I try to find out what the guys we have can do and cater to them. If you don't have corners that can cover, defensive ends that can play inside, you have to adjust the personnel you have to make it fit, be successful. 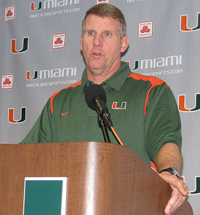 Is it me, or does John Lovett have street preacher crazy eyes?

NOM NOM NOM! The Herald released its Pre-Spring Top 30 prep players for Dade and Broward counties, from whose bosoms spring forth approximately 99% of NFL and college players and every single one of America's strippers.  We're especially fond of Miami Northwestern's DT Todd Chandler, who committed in December and had a little coming out party when he showed up at a Miami practice:

"Marcus Forston and I had spoken earlier in the day and he said they were practicing," Chandler said. "I wasn't doing anything else, so I went out there. I talked to Coach Hurtt and Coach Barrow after practice, was getting to know them better."

And Hurtt did something that Chandler says he'll remember for a long time.

"After practice he introduced me, put me in the middle of (the defensive tackle) circle, said `This is 2010 commitment Todd Chandler,'" Chandler said. "The players were hugging me, giving me 5. They were telling me congratulations, that they were happy for me."

Eric Moncur: Assisted Living resident, Defensive End Several players were also made available to media yesterday.  Sean Spence descended from heaven to tell reporters that while he thought he played "well" last season, it was "not good enough to make us win more games. I want to help the team win an ACC championship and hopefully a national (title)."  CARTOON BIRDS ARE FLYING AROUND HIS HEAD RIGHT NOW. [full audio]

Eric Moncur spoke about receiving a sixth year of eligibility after a sports hernia forced him to sit most of his senior season. "I appreciate the coaches and everything, fighting for me to get a sixth year, and they got it. So, I'm going to take advantage of my opportunity.'' [full audio]