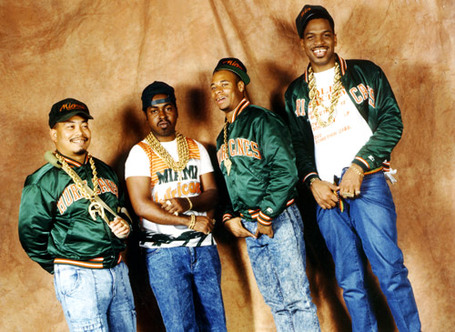 Big beats, deadbeats, and an excuse to use the photo above  UM football  Booster Hero Luther Campbell was jailed in Miami yesterday, charged with non-payment of child support to the tune of 10k+. His children claim they held up their end of the pay-for-play agreement, display toys as proof.
7th Floor PSA: support your kids, assholes.

Miami football, now brought to you by unsettling double entendres Javarris James gave the media an idea of what the team's first meeting with Mark Whipple was like: "He gave it to us raw."  (pause)  More here, including: "He's a straight-on guy...He kind of put us in our place, said a few words in the meeting that caught us by surprise. It was like tough love. That's different from what we were used to. We know this guy came here to win. That's what he's been used to."
You can watch Baby J's interview with media yesterday at CBS4.  James talked about finding himself with a senior season after battling injuries and says his NFL evaluation came back better than he'd expected, but he felt he had not accomplished enough and his team needed him.

Weebles wobblin' From yesterday's media nuggets comes news that Jr. tackle Chris Barney is still in schooll (unedited for maximum lulz) but moving on from football. Feared Gator killer/gator killer Allen Bailey will likely see his third position in as many years, moving inside to DT.  Guard Orlando Franklin is going to get an opportunity to play right tackle this spring, a move that he hopes is permanent: "When you play tackle you play against a lot faster guys. At guard everything is right there. You have to be smarter to play tackle, I think. I want to be that guy - on fourth and one there shouldn't be questions where they want to run that ball."