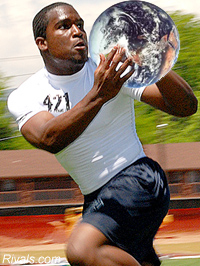 He's got the whole world in his hands!

Imagine if he turned against gravity! According to Brian Butler's website, Bryce Brown "knows that his decision will impact so many others; including coaches, players, and an entire football program."  And now, the day following the expiration of his letter of intent, comes word from the Associated Press that the number of outsiders moving to Florida has just dropped by 30%. Coincidence? BRYCE BROWN THINKS NOT.

Speaking of Butler, here's an interview from ESPN radio last night.  He is also expected to be on 790 The Ticket today around noon, which you can stream live if you hate yourself.

I'm a kicker? Team MVP and greatest punter in punterdom (and resident of the chill zone - Rusty98UM) Matt Bosher will miss spring practice recovering from shoulder surgery.  "Shoulder surgery for a punter?" you ask. Yes, this is what happens when your kicker is possessed by a filthy linebacker.  Forward to 3:05, watch two plays, curse your piddly special teamers and the day they were born:

Barrow loosed on defense, recruits; both cower in terror The Palm Beach Post reports that new DC John Lovett will take over coaching linebackers and former position coach and all around badass Michael Barrow will be a general defensive assistant and become more involved with special teams.

Shannon made clear that switching Barrow’s responsibilities is not a demotion. Just the opposite. “It gives coach Barrow more range to work at different positions,” Shannon said “He deserves it because he’s a good ball coach. I’m excited about him and excited for him.”

Oooooookay, because that sounds like a demotion. But whatever - so long as the big guy's happy, we're happy, because, well, this again.