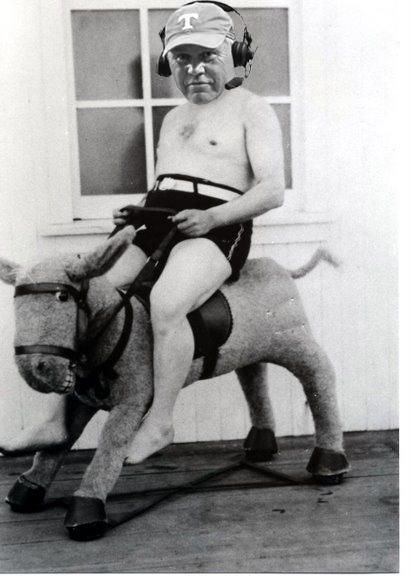 Does your mind go here, where mine went? You sick bastard.

This is not at all news about our beloved Hurricanes, but sometimes on an offseason Tuesday the whimsy wanders a bit.  From the Orlando Sentinel:

Former Tennessee football coach Phil Fulmer was named grand marshal of the annual Mule Day Parade which takes place in Columbia, Tennessee on Saturday, April 4...the official site says that Mule Day has been a tradition since 1840 and attracts more than 200,000 visitors come to spend the week celebrating all that is mule.

Just watch where you step.

This is tickling in so many ways, not least of which is that you know Fulmer's secretly pissed he didn't get a festival celebrating something edible.  We wanted to publish an accompanying photo of Nick Saban presiding over the Tuscaloosa Pecan Pie Festival, but it's just a back hole and the sound of souls screaming in eternal torment.