tip of the cap/ wag of the finger: miami spring game edition

Share All sharing options for: tip of the cap/ wag of the finger: miami spring game edition

tip of the cap to damien berry:

for running roughshod over the first and second (mostly second) team defense, including a nifty little 54 yard scamper down the sideline.

wag of the finger to graig cooper:

for fooling me into believing it was not possible for him to disappoint in a spring scrimmage game.

tip of the cap to allen bailey: 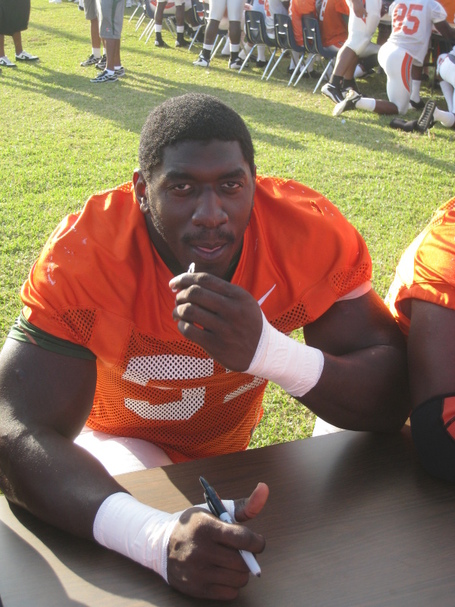 for getting an early start on his post-football movie career as the body double for all future installments of 'the incredible hulk'.

tip of the cap to sam shields:

for making the move to corner and for making a phenomenal break on the ball and batting down an otherwise completed pass to laron byrd.

wag of the finger to freshman rb mike james:

for being a big attention whore and ruining randy phillips' otherwise ridiculous interception return by making the tackle after phillips successfully juked all 34 other offensive players on the field. showoff.

tip of the cap to calais campbell:

for somehow managing to make allen bailey look not quite so freakishly gigantic, by standing his big 6'8 self next to bailley on the sideline during the 3rd quarter. (no i dont have a pic. i moved higher up in the stands for the 2nd half. partly because i could see the plays develop better but mostly because i couldn't shake the notion that, if he so desired, allen bailey could just reach one of those freakishly huge limbs over the fence and crush my skull in his hand and there's really nothing anyone could do to stop him.)

wag of the finger to middle aged white guys who feel compelled to wear loud orange and green, form fitting under-armour type shirts that force my eyes to witness the horror of their frail, flabby, muscle-less torso and arms.

tip of the cap to trashy white chicks in their mid-late 30's with tattoos of some kind of big game cat's claw tearing through the skin on each of her breasts.

wag of the finger to shitty PA announcer guy who repeatedly credits catches and tackles to the wrong person. swear to god, i had a 5 minute conversation with the fat black guy seated next to me about how, apparently, marcus robinson changed his number to 29 and is now a defensive back. i hate you, shitty PA announcer guy.

ok, that's all for now. we'll be back soon with photos, analysis and more dick jokes.