Randy Shannon is making a calculated attempt to adjust his terrifying street rep to something a little more...playful. He recently blew minds with dead-on impersonations of the seniors before the final game (I'm guessing he flopped on a tackle, popped up, and exclaimed "I'm Glenn Cook!" to thunderous applause) and is set to continue his humorous ways no matter how unlikely.

"This year, because we're an older team, I can be more free and mess around with them," Shannon said. "I'm going to be more lively, more open, the way I was as a defensive coordinator.

How's New Randy doing? This is, after all, the guy who told a prison brawl story to the Sports Kids, so Orson Swindle from Every Day Should Be Saturday and I sat in on a recent team meeting to monitor his progress and bring a few nuggets back to you, the reader. 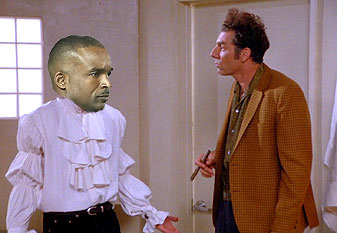 RS: A guy walks into a bar with a wild dog. The bartender says, 'You can't bring that in here.' Then the dog rips this throat out and he dies.

RS: Why did the chicken cross the road?
Team: To get to the other side?
RS: Because your whole family had AIDS!

RS: What's up with airline food? I mean, it's bad for you, right? LIke losing everything you love in a flash of bullets during a home invasion.

RS: Hey, how many Florida State Seminoles does it take to screw in a lightbulb? It doesn't matter, because they're all on fire.