Share All sharing options for: The Connect: Post-Spring Game Edition 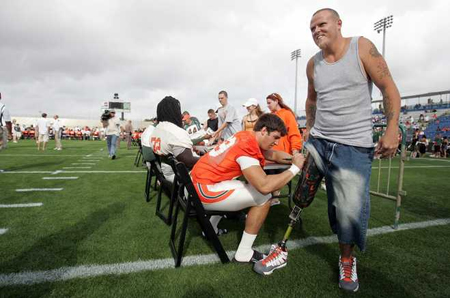 I suspect that's the infamous NED in a white man costume,
and that thing is really a gun.

Okay, let's get the boring parts out of the way. The Spring game is more useful behind the scenes.

If, like me, you get a little moist at the thought of Jimmy Johson holding court in Coral Gables at the same time recruits are in town for the spring game, today's your day. The Big Man watched the 'Canes work out on Friday while ordering old players to backpedal on command (they did).

I was born in south Texas and went to the University of Arkansas, but I want to make it very clear -- South Florida is my home, and the University of Miami is my team. I consider myself alumni. The best five years of my life and career are right here...the Canes and their people have a passion for doing it the right way.

I think it's exciting right now, the way they recruited the last couple of years. I think Randy was handcuffed a little bit when he first took over the job because the talent level had been down, but I think they're back on the level now where every single Saturday they'll be out there with a chance to win. With as young a team as they are, they're going to have some struggles, but there is some tremendous talent.

That's a long quote, but (sniffles).

Pics!  Anton Acuzar Azucar (they both sound like a magician; forgive us) has not one, not two, but three galleries from Saturday.  From them, I learned that Mark Whipple has a gigantic ass. He's in the right town.

Mo pics!  BeauceCane has some pics from the pre-game fun over at Canesfest. Travis Benjamin is so, so pretty. And the Johnny Unitas Golden Arm Award looks an awful lot like it was made by this guy.

Miami hosted the Nike Football Training Camp this weekend, and many recruits were on hand for the spring game:

Five-star pink-backpacked monster Jeff Luc was at the camp but no confirmed sightings at the game.