Do not picture Nancy Reagan wearing only this jersey Oh yeah? I'll see your this and raise you this. Get on our level. 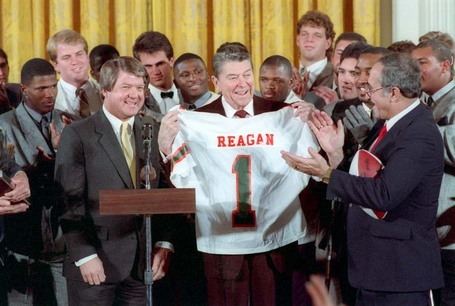 When you say "inflatables," do you mean cheerleaders? This morning's Connect brings you Actual News Items Intended To Inform You. Hurricanesports.com released a schedule of events open to the public between now and opening kickoff AGAINST FLORIDA STATE WOOOOOO!:

Go forth, minions, and e-mail us pics of Allen Bailey.  Riches will await you in the afterlife, which will suck, because there will be no place to spend them.

Like manna from heaven...are the practice tidbits.  Shannon has continued to let media observe practices beyond the four originally allowed.  Nugget time!

Ed Reed again attended practice on Wednesday. "There's just something about it," he said. "I feel like I want to put something in after getting so much. These young guys are great. It does something for you."

Jason Fox projected into the third round of the NFL draft after this pass season, and decided to return for his senior year. "I'd rather win a championship and deal with the NFL later," Fox said after Wednesday's spring workout at the Greentree Practice Field. "I'm more concerned about winning this season than trying to improve my draft status. I felt like it was a smart decision to stay, and I'm very happy with it."