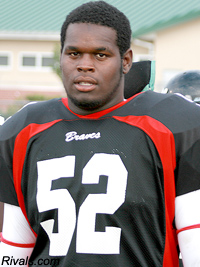 I'm sure this has nothing to do with that whole Playboy thing.

Without ever having been on campus, **** Tavadis Glenn (Jacksonville Terry Parker) just committed to Miami.  The defensive tackle and offensive lineman will play whichever way he can for the 'Canes -- and says he's done with recruiting.

"I'm not considering anyone else - it's solid," he said after turning down offers from LSU, USC, Florida, and South Carolina, among others. He said the decision was made when UM coaches didn't bail after he was recently injured when hit by a car.

"I'll be good in six weeks. But with me being injured some schools took offers off the table. Miami coaches, they were straight up with me...They made me feel at home.

There are no other schools."