on the bright side

Share All sharing options for: on the bright side 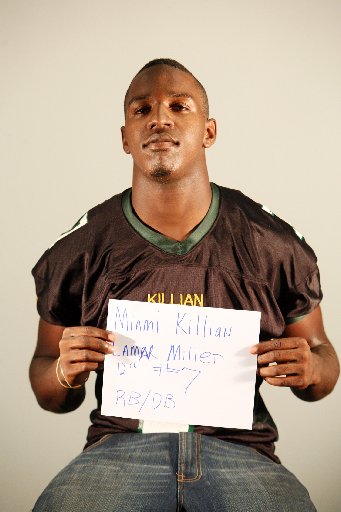 according to the miami herald...

Miller has eyes on... winning the state title in the 100 meters. Miller finished 11th in the state last year and currently has the 25th fastest time (10.73) this season in the state...  Normally, non-track officianados would think that's not that impressive. But when you look at... how his career best (10.56, which he ran as a junior) compares to other Hurricanes and football greats, you come to appreciate the great open field speed Miller possesses for someone who stands 6-feet and weighs close to 210 pounds.

Devin Hester... his fastest at Riviera Beach Suncoast was 10.87 seconds.

Miller will likely be trying to beat a pair of future Gators when he gets past next week's regionals at Traz Powell Stadium. Among the speedy runners in front of him expected to make the final eight-man field -- receiver Andre Debose (10.63) from Sanford Seminole and 2010 cornerback Demar Dorsey (10.55) from Lauderdale Lakes Boyd Anderson. Another big name expected to participate in the race, future Michigan quarterback Denard Robinson(10.44) from Deerfield Beach. All will be trying to chase down one of the country's future Olympians in Dentarius Locke (10.35), who is headed to Tennessee on a track scholarship.

With freshman running back Mike James already in camp and making noise on the depth chart and veterans Graig Cooper and Javarris James back, there likely aren't going to be enough balls to go around in 2009 for Miller to get much of an opportunity to show what he can do in the backfield. But in the kicking game, he could prove to be extremely valuable. In his three varsity seasons at Killian, he returned nine kickoffs back for touchdowns. "Kick returns, I'm very comfortable with those," Miller said. "I've been doing that my whole career. Punt returns? I got to work on those. But I like getting the ball, seeing an opening and hitting it full speed."