Share All sharing options for: we're still good at baseball

while the U's temporary  descent into football mediocrity has been well publicized, canes fans can take solace in knowing that we're still pretty f*&king good at baseball. evidence of this can be seen in yesterday's skull f*&king of wake forrest. the 21st ranked canes put up more runs yesterday than their 2008 football bretheren did in 6 of their 12 games last season. (enjoy him tennessee) 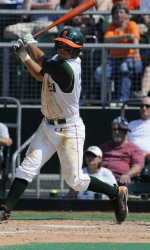 -All nine hitters in UM's starting line-up had recorded a hit before the second out of the second inning was recorded.

-Miami's 25 hits on Sunday were the most in a single game since the`Canes recorded 26 against Virginia on April 24, 2004.

-The Hurricanes scored multiple runs in four of the first five innings, plating six in the first, six in the second, two in the third and three in the fifth.

so yeah. we got that going for us.