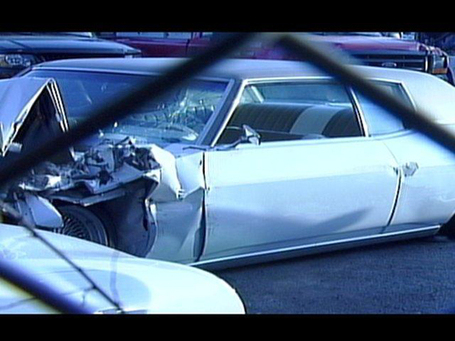 Jeez, thugs of Pittsburgh.  If you're gonna steal a car, make sure it doesn't belong to a dump truck.

BM Hero and infamous Hurricane Najeh Davenport was chilling at home in Pittsburgh, with his car idling outside.  Not just any car, mind you, but the 1970 Impala for which he worked all summer for at 15, just to save $500 to buy a place to have sex.

He's since spruced it up a little, so it appeared a bit too tempting for one Rodney Terrell Green -- who hopped in and sped off and paid no mind to at least four parked cars on the escape route.

Davenport wasn't having any of that, though, and hoped in an SUV to pursue the thief (are ALL his cars just sitting around idling?).  He chased Green into a Foodland parking lot, where he "stopped him" on foot and detained him until police arrived.

It was blue steel.