Share All sharing options for: The Connect: Summer CanesFest Edition 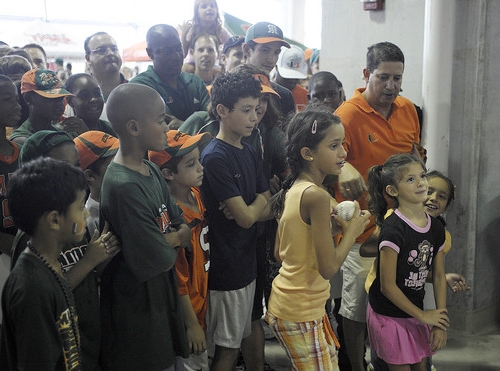 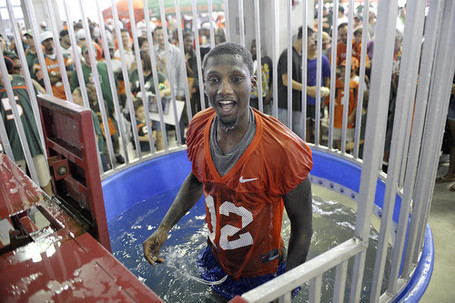 Let's just get this out of the way: Bryce Brown was there, in Tennessee shorts. Clearly, between having a UM hat at his signing for no reason and showing up to CanesFest, he has a giant boner for both Miami and attention. Speaking of hats, Randy Shannon said on QAM from the stadium that most of the time - not always, but most of the time - kids who pull hat tricks are basically assholes and not worth the trouble. Snap!

The Sun-Sentinel has pics, though no one has yet looked at Travis Benjamin directly and lived, so beware.  The Palm Beach Post keeps an eye on the Freak. And Eye On the U is impressed with the fan-friendly affair:

Not once in the 14 years I've been working for The Miami Herald have I ever seen fans not only have two hours worth of access to players and coaches, but to be able to interact (take pictures, dunk players, even get some smooches) with them like family and friends. Hats off to athletic director Kirby Hocutt and coach Randy Shannon for taking a giant leap forward from the way these events used to be run.

Several players were game to spend time in the dunk tank at fans' mercy, including Graig Cooper, Laron Byrd, Sean Spence, and Javarris James.  But none made the impression that Allen Bailey did: "He's like Shamu up there," said a UM assistant before Bailey was dunked and the splash was so large more water had to be added to the tank. 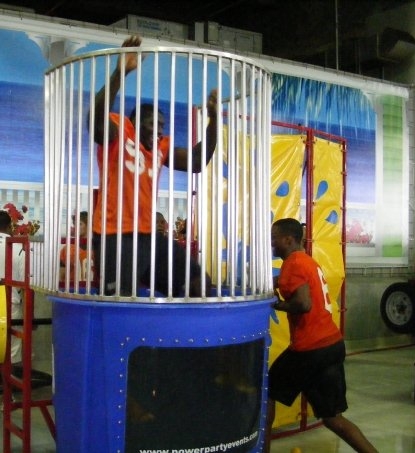 Dedrick Epps was roaming around reassuring everyone that he's functional after knee surgery, and will be ready to go when workouts start.  "I'm fine," he said, though he noted he's not 100% yet and still feels sore after workouts. "I've been running on it for a long time. I don't know exactly how long, but it's been a little while. I'm feeling good. I plan to be ready."

Ray Ray is not, unfortunately, perfect in every way on arrival. "He's definitely big and strong," Chavez Grant said. "But everyday in practice we're working with him, trying to get his feet right and work with his hips. He's not bad. But at this level you have to be a lot quicker, a lot faster at what you do... at this level you get beat by a step and it's over."

Jimmy Graham is no male cheerleader: "I definitely didn't want to come back to look pretty on the sideline," he said. "I came back so I can help these guys win something. It means a lot for me to play for the U, especially football, my first love."  We'll check back in with him in August when he realizes the contact happens without a/c, but in the meantime, he's getting help from Bernie Kosar and Ed Reed. (Hopefully not financial help.)

The young guys are breaking down film with the ProCanes. Jacory's shoulder is okay. Randy Phillips is god. And Arthur Brown is coming out of his shell. Manny has it all.

Said Bailey about getting Moncur back: "He's been here about eight years now. He knows a lot. He's been around, has seen a lot of things."  LIKE THE EMPTINESS IN LARRY COKER'S EYES.

Colin McCarthy says Heather Dinich's no. 1 ranking for his unit sounds good. "That makes sense, that's accurate," McCarthy said. "We have a lot of depth, are two or three deep across the board. With Sean, he's one of the top linebackers. With all of us together and the way we work, way we chase the ball, No. 1 in the ACC, that sounds about right."

Of Lovett's defense, McCarthy reported, "It's more of the defense we ran my freshman year under Coach Shannon. It's not as many checks, just go out there, we'll get a call and play football. That's how it was back in the day when the athletes we had could just use their athleticism and make plays. The defense is more simplified."

CBS4 has video of Jacory being Jacory.

Rest assured we at The 7th Floor will never, ever work that hard.