We already have a penis shark, thanks, and his name is Sean Spence: Eye on the U completes its countdown of 60 'Canes and naturally Sleepy is numero uno. That's no. 1 even with all-male slumber parties factored in, so really he's more of a Giant Throbbing Dick Shark -- but now we're just quibbling.

The Orlando Sentinel weighs in on why UM-FSU isn't sold out. Three of the reasons are slams on Tallahassee, so...makes sense to me. Why I won't be there: liveblogging here! Mark your calendars.

Practices are now at 5:42am, to avoid thunderstorms. Um...that's really early.  In worse news, Dyron Dye is in a knee braces with, according to Rivals, crutches at the ready.  I miss the days without Internet, when you didn't have to know these things.

Randy Shannon set off a metric fuckton of speculation when he stated yesterday that "I just received three transfers trying to transfer to the University of Miami. It's an opportunity that players see at [UM], that we're going to give guys a chance to play. We want competitive young men to come in and compete." He's since stated that he's not accepting any of them and his team is on the floor. (It was probably that asshole Favre. He's like a kid, you know.)

Finally!  They get around to him.

Getting to Know The "U" Freshmen - Mike James

Hometown: Haines City, Fla.
Position: Running Back
Favorite Food: Ribs
Gucci Mane is in my iPod right now
I'm a `Cane because: I wanted to win
My training camp roommate is: Brandon McGee
Favorite part about being at the U right now: Playing football
Preseason Camp has been: A good experience
Favorite post-practice thing to do: Watch film
Lamar Miller keeps me laughing
I have learned so much from Coach Robinson
My most freshman-like moment was when: I left my helmet in the locker room at the start of practice
I wouldn't want to be hit by: Allen Bailey
If Javarris James is a Cadillac, Graig Cooper is a Ferrari, then I can be a described as a: Mustang
Favorite sport besides football: Basketball
Who would win "Dancing with the Stars" - Javarris James, Graig Cooper or Lee Chambers? Coop
Most likely to bring down the house at a comedy club - Joel Figueroa, Orlando Franklin or A.J. Trump? Joel Figueroa 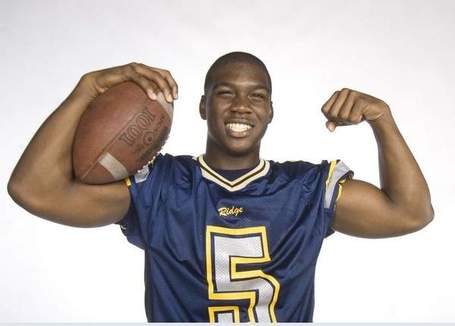