Share All sharing options for: fate runs a 4.2 forty. in pads.

it is no small accomplishment that legendary recruiting trail blogger  diarist, miami carol city  "graduate" and famed lobster afficionado, willie williams, managed to outrun fate for the better part of the last 5 yrs. as stated above, however, fate rolls out of bed half asleep and runs a 4.2, barefoot on wet grass. you just can't outrun that kind of speed. 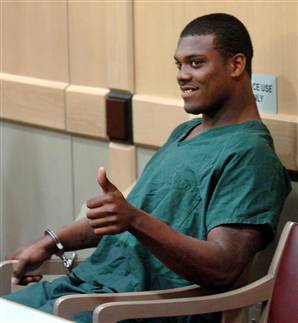 according to the miami herald:

Williams... was arrested again Thursday in a suburb of Atlanta and charged with burglary and reckless driving after trying to evade police in his car. He is in the Gwinnett County Jail in Lawrenceville, Ga., after being denied bond for the burglary charge -- a felony.

Williams, 24, had [ed. note allegedly] unlawfully entered the residence of a family he had befriended in Suwannee, Ga., when they weren't home. He allegedly stole items that include, according to the arrest report, an XBox 360 gaming system, Wii gaming system, digital cameras, four iPods, a Palm cellphone, Dell desktop computer, Dell laptop computer, several hundred dollars in cash, several pieces of jewelry -- and more.

sigh. on a happier note, VH-1's long awaited "bryce, willie and mo" reality show is officially in pre-production, and is scheduled to air sometime in 2011.