Mike Jaaaaaames! Our favorite RB needs a date; sounds like he oughta slap a wig on no. 99.

According to Brandon Harris the Canes made it a point to catch all the blockbuster flicks together this year. The team's favorite? Probably The Hangover. "We do everything together now. Everytime we go out, we have 50, 60 people going to the movies," Harris said. "We send a couple people to buy tickets. Last night we saw GI Joe. A couple weeks back we all went to see The Orphan. You'll be surprised how these guys act with a scary movie. Marcus Forston was screaming like a girl. We go to the movies so much. I think the favorite was The Hangover. That was a big one. Everybody was crazy about The Hangover. Mike James saw it about 10 times. He went everyday by himself."

Practice schedule? Why, it's right over there to your left, in a brand new widget!  Manny Navarro reminds us that whatever we're paying Clint Hurtt, we should be supplementing it with kitty drugs cheeseburgers.

On Friday, Hurtt had his first official meeting in the film room with his players and greeted them with a set of numbers on the chalkboard according to defensive end Adewale Ojomo. "It compared how many yards teams averaged on us each game and how many they averaged on us at the beginning of the season," Ojomo said. "After that, we didn't need to be motivated.

"All we needed was the practice schedule."

The F word appears: honestly, I can't recall a single instance of players or coaches using the word "fun" to describe football at Miami in the last, oh, five years.  And I swear I've read it at least 6 time since yesterday.  I would imagine Randy Phillips is right -- this house is cleah -- and it must help that the worst offensive coordinator in recent human history is gone:

"[Whipple]'s real patient. He lets us have fun. That's one thing I love about him," Graig Cooper said. "It does feel like more an NFL program. He lets us practice. He doesn't dwell on mistakes. We correct them now. But he doesn't dwell on them or treat us like a little high school kid. He'll be patient and let us correct it ourselves."

PBP's Dave George does no research claims the pressure is on Shannon else he be fired, and that the program is "unhinged from the championship promise of the football team's historic past:"

All the problems compound, though, even for the strongest Shannon supporter. When a coach isn't signed for the long run, other schools use that in negative recruiting.

Shannon's seat might very well be hot, but I can't see an argument where problems are "compounding" rather than fading away, and the "championship promise" isn't closer now than it was with the team Shannon inherited (perhaps the only trade I'd make? Kenny for Randy).  The catch: the record might not reflect that, but it remains to be seen.

Meanwhile, Greg Cote claims the lack of extension is Shannon's idea, not Donna and Kirby's:

The truth is Shannon's contract would have been extended already, reflecting a modest raise, if the university had its way...The delay is the coach's idea...

He believes privately that Miami can go 9-3 or even 10-2, get into a major bowl and set up his young team for a realistic run at a national championship in 2010

...He banks on this season being much improved overall and offering the tantalizing hint of championship potential to turn that modest raise UM has in mind into a major payday. Shannon, 43, just saw Florida coach Urban Meyer enriched to $4 million a year. Boss Cane won't make that leap without a national title, but believes he can get a lot closer if his team justifies his faith over the coming months than he would right now, coming off last year's 7-6 record.

It is a gamble because the Canes are young, and because potential means you haven't done it yet.

Is the old windbag right?  Who knows. But between the doomsday and sunrise scenarios, it's hard to choose the darker one; however disappointing last year's Moncur-less late season meltdown was, it's no lifeless Orange Bowl swan song.

Tidbits: Backup Taylor Cook wants us to know "I'll be ready" if Jacory Harris should go down with injury [OHDEARGODNO].  He also says he's working on a quicker release at Whipple's request.

Vaughn Telemaque says this season will be his "coming out party," and credits Ed Reed for becoming "a big brother figure for me." 100 Diana Rosses to both of you, boys.

From Jorge Milan's twitter: Jacory was asked Patrick Nix with Whipple: "I can's speak about that," Harris said.  Also, Randy Shannon has placed Whipple and Lovett off-limits to the media. What did they used to call him?  YGC.

CBS4 has another of those creepy voyeuristic videos from Practice 1.  Missing from the soundtrack: rustling of bushes, self-pleasuring cameraman. Not missing: "he's the one with the paper in the front of his shorts." Lovett stuffs!

Shandel Richardson twittered this morning that Reid is back at practice after tweaking his ...ankle? hammy? yesterday.

Not back from injury yet?  Our favorite sideline sobber, Gavin Hardin. THIS IS HOW WE FEEL ABOUT THAT: 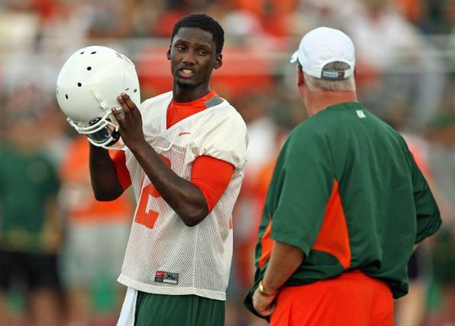 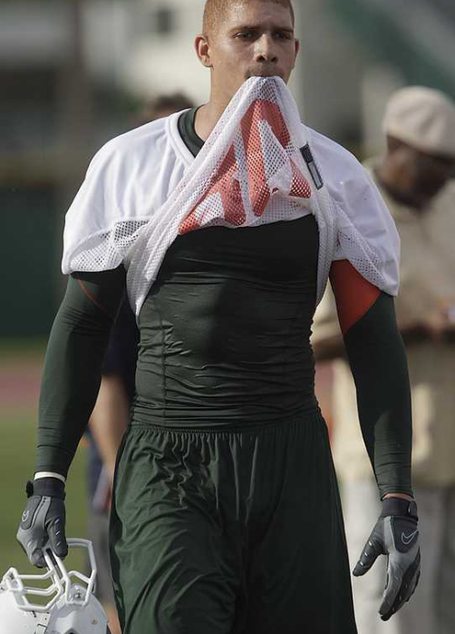 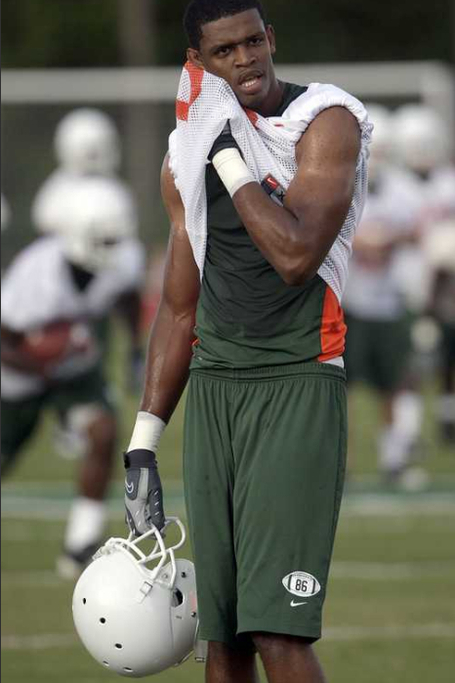 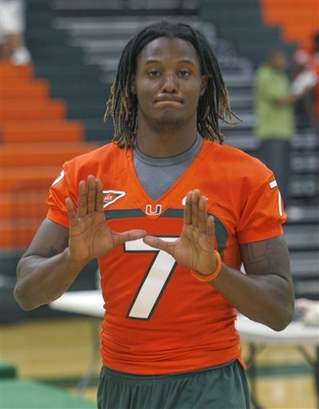 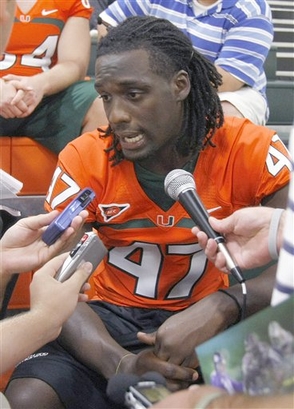 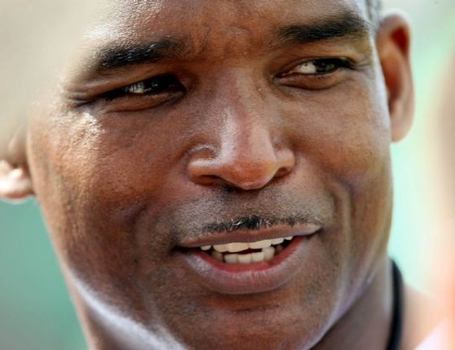 DO NOT UNDERSTAND MUSTACHE