rather than go to bed at a decent hour, we at TSF opted to stay up till 3am and re-watch the entire glorious goddamn thing last night, courtesy of Sunsports. 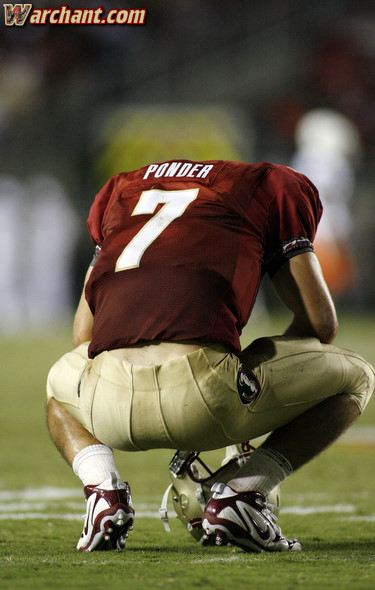 it cannot be overstated how much difference it makes when you watch the game sober, and without your stomach in your throat for the entire second half. without further ado, we present TSF's contractually mandated "post-game analysis"

in no particular order...

QB: the fawning over jacory's "poise" has been discussed ad nauseum. what hasn't gotten nearly enough pub is how ridiculously accurate he is. admittedly, there were a a couple misfires, but if you go back and watch the tape, all but a handful of those throws were dead on balls accurate. for that, we give jacory a perfect 5 out 5 playmakers.

D-Line: the unit that was most expected to suck balls and cost us the game, performed admirably under the circumstances. FSU's O-line is no joke. matter of fact, FSU's O-line may be one of the better O-lines we see all year. yes, ponder had all day in the pocket for most of the game. and yes, we only got a few licks in on him. but given the injuries, given the accompanying lack of depth, give the lack of experience from guys like wesley and vernon, and given the quality of talent they were up against, the D-line performed far, far better than i had expected under the circumstances. three playmakers.

WR: some... celestial event. no. no words. no words to describe it. poetry! they should've sent a poet. so beautiful. SO beautiful... i had no idea. five out of five playmakers.

LB:  the bright side is that we managed to win despite dogshit play from the LBs. i've watched it like 3 times now and i still can't figure out wtf sean spence bit on when ponder hit piurowski, WIDE F*&KING OPEN, for that TD in the 1st Q. ponder's eyes were locked onto piuroski before the ball was even snapped. there was no pump fake. there was no looking off the safety. i've seriously watched this like three times and i have no idea wtf he bit on.

DB: yeah, so ponder spent most of the game holding a scalpel and wearing surgical scrubs. but it wasnt ALL bad. no? you dont believe me? remember phillips' pick in the endzone pick right before halftime prevented a td that would've been a huge momentum changer going into halftime. harris coming back after that PI call to bat down the game winning td. shields getting his hands up in the receiver's face to prevent a huge gain that would've put FSU in the redzone? whoo-hoo-hoo, look who knows so much. it just so happens that your DBs are MOSTLY bad. there's a big difference between mostly bad and all bad. mostly bad is slightly good. two playmakers.

O-line: nothing like starting your first game of the season, on the road, in tallahassee, with a false start. dumbass penalties aside, that O-line was light years better than anything we've seen from a UM line in about five years. if they can give jacory time in the pocket the way they did monday night, it's going to be a fun year. four playmakers.

Randy: taking the holding penalty on 3rd down and giving ponder another crack at it instead of forcing 4th down and a possible FG in the 1st Q. billiant! mismanaging timeouts. brilliant! clock mismanagement. brilliant!

Whipple: it would've been nice if he could've made baggies of pure cocaine start falling from the sky after the game, or maybe brought in a unicorn in the 3rd Q to run a double reverse.

Random thought: the only other thing that's worth noting... is that I have zero f*&king interest in ever seeing greg reid or jacobbi mcdaniel, ever, ever again.