Javarris James and A.J. Trump will break their legs in the East-West Shrine Bowl on January 23, something we have never, ever paid any attention to. It'll be held in Orlando for the first time in 85 years, which means if they're smart they'll take out a $40 million insurance policy and never work again.

Surface of the moon, Citrus Bowl field, the picture of pre-draft career death, or Willie Cooper's ass? You decide. 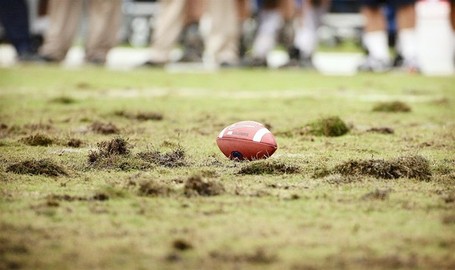 "It's a great opportunity to come in early," he said. "I had to do a lot of things like extra classes, extra hours, but I'm satisfied with what I did and the decision to come early so I can learn the playbook and show coaches what I can do."

As for Morris, he became the first person allowed to graduate early from Monsignor Pace ever. "I did what I had to do and it just worked out well."

By the way, Shane McDermott won the Palm Beach County science fair with a project on the effects of acidification on the asexual reproduction of corals. SUCK IT, GATORS WOOOOOOOOOO!

Speaking of recruiting, Miami's received a verbal commitment from a Bahamian plumber who's only played 5 games in his life. "More than four" was enough for Miami, who snagged Miami Beach's defensive tackle Delmar Taylor even though Mario Cristobal found him first.

Taylor, who's 6'5", 260, went back to his hometown in the Bahamas to support his family by working as a plumber's apprentice after an accident injured his mother, then came back to Miami and decided to try football. He sat his junior year while learning ("he didn't even know how to get in a three-point stance in January") and then had his season cut short by eligibility issues (of enrollment, presumably, not grades).

Meaningless Bowl games are meaningless. Seriously. More on this later, but yes, the Champs sucked. Of course it sucked. Does it mean a single thing about next season? Nope. Not even a little bit, something that message boards seem to have forgotten in the most annoying, embarrassing way possible. The Connect closes with a particularly pointed reminder from a poster on Canespace, who saved me the trouble of typing it out:

You know what kills me about some of our fans...

They revel in the past: Howard, Jimmy, Dennis.

Yet I was there for those Maryland, BC, Tennessee games that were embarrassments. I was there watching that stupid LB pick off Vinnie 3 times in the original Fiasco bowl. I watched Miami, during a National Championship season, almost get beat by Toledo.

Some of you guys remember Miami for its greatness and conveniently forget the trial a coach as great as Jimmy Johnson actually had - yeah, the guy who replaced Howard and took over a national championship caliber football team.

Shannon didn't take over anything even remotely looking like a championship quality team. He too over a program that had crumbled to the ground.

He's gotten this team to 9 wins in a day and age of football where 9 wins actually means something. It's a lot harder now than it was for the Cane coaches.

All this talk by some of you is sickening and retarded.

9 wins at this point is just about right. 10 would have been great. But oh well...

People didn't really have patience for Jimmy back then but somehow it paid off. His players won a total of 3 titles. Not too bad.

Only a 'tard can't see that.