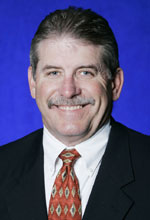 Rick Petri: He does this for his culture.

Meet Rick Petri -- again. The molder of defensive linemen and Concussor of Tebow Once-Removed is officially back at Miami, replacing the dearly departed Clint Hurtt, and just in time to replace Danny Trejo in our planned Mexican-free version of 'Machete'. Petri was a finalist last year for the national Defensive Line Coach of the Year award by FootballScoop.com, a website no one cares about, but here's what's good:

"Technique is critical. It's an equalizer. The better technician a player is, the better player he will become."

Player development, then? Player development. The only knock I've ever read against Petri is that recruiting wasn't really his thing. But at Miami, it won't have to be. So as handy as Hurtt was in that capacity, this is a major upgrade in terms of teaching and coaching. The man has decades of experience and built a pretty decent line at Kentucky, so we'll see what he can do with Marcus Robinson and Allen Bailey and Dyron Dye and ohgodneedcigarette.

Petri came to UK from Ole Miss, where he coached the defensive tackles for six seasons. He joined the Rebel staff in Dec. 1998, in time to help coach the team in the Independence Bowl. The Rebels were bowl-eligible for the next five seasons and played in four more bowl games, capped by a 10-3 record and Cotton Bowl victory in the 2003 season. Two of Petri's tackles, Kendrick Clancy and Jesse Mitchell, earned first-team All-Southeastern Conference honors. Clancy was selected by the Pittsburgh Steelers in the third round of the 2000 National Football League Draft and has been in the league for nine seasons.

A native of St. Louis, Mo., Petri graduated from the University of Missouri-Rolla. He began his coaching career as a graduate assistant at Pittsburg State in 1977-78. He went to Arkansas State in 1979, where he worked as a part-time coach with the offensive line. He was elevated to full-time assistant in 1980 and coached the defensive line until 1988.

Petri entered the SEC for the first time when he coached the Ole Miss defensive line from 1989-91. The Rebels advanced to two bowl games and Petri mentored defensive tackle Kelvin Pritchett, a first-round NFL draft pick who enjoyed a 14-year career with the Detroit Lions and Jacksonville Jaguars.

After a year coaching the defensive tackles at Louisiana Tech, Petri went to Miami (Fla.) for three seasons with the Hurricanes. Petri coached consensus All-America and Lombardi Award-winning lineman Warren Sapp and helped guide the 1994 Hurricane defense which led the nation in scoring defense and total defense. In addition, Petri coached All-America defensive end Kevin Patrick and defensive end Kenard Lang, who was named Big East Rookie of the Year. Miami played in the Fiesta Bowl and Orange Bowl during his time there.

While with the Hurricanes, Petri coached three future NFL first-round draft choices --Sapp (Tampa Bay, 1995), Lang (Washington, 1997), and Kenny Holmes (Houston, 1997). Sapp, of course, was a multi-year Pro Bowl selection and was the 1999 NFL Defensive Player of the Year. Lang was a nine-year NFL vet with the Denver Broncos, Cleveland Browns, and Washington Redskins. Holmes played several seasons in the league with Tennessee and the New York Giants.

After Miami, Petri took over defensive-end responsibilities at South Carolina from 1996-98. He developed John Abraham, a first-round pick by the New York Jets who spent five years with that club and is now with Atlanta.

Petri and his wife, Marsha, have two sons, Brad and Kory.