Share All sharing options for: It's a Bird! It's a Game! It's the Truth!

Well, it's senior day, so we've got that going for us. Apparently there is also a plane flying over Sun Life Stadium trailing a message that reads "4 YEARS 0 ACC TITLES LOTS OF EXCUSES FIRE SHANNON."

So, you know, we're all taking this 7-4 thing as expected. 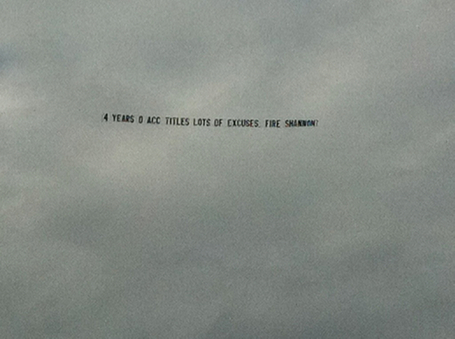 Hopefully that talking-to Travis Benjamin was given after Virginia Tech really touched his heart, because it would suck to lose to USF. The fifteen seniors are after the jump, in varying degrees of worth, and with stats from UM.

Damien Berry
Berry leads the Hurricanes and ranks third in the ACC with 810 yards rushing this season. This senior has appeared in 44 career games and garnered nine starts, all coming this season at running back. Earlier this year, he joined Edgerrin James, Willis McGahee and Clinton Portis as one of only four ‘Canes since 1985 to have recorded for four straight 100-yard rushing games. In his career, Berry has 1,426 rushing yards and 14 touchdowns.

Matt Bosher
Bosher has appeared in 48 games as Miami’s punter and 37 as the team’s kicker over the last four seasons. His 105 straight extra points made from 2008 to 2010 ranks second all-time in school history, while he also ranks seventh all-time with 249 career points. A three-time All-ACC performer, this senior currently leads the Atlantic Coast Conference in averaging 44.9 yards per punt.

Jared Campbell
Campbell has played in 24 games in his career, including six starts all coming last season. An Aurora, Colorado native and graduate of Overland High School, this safety has 35 tackles, two tackles for loss, one forced fumble, one fumble recovery and five pass break-ups in his career.

Graig Cooper
Cooper is among the program’s all-time leaders yards gained, ranking third in UM history behind only Santana Moss and Ottis Anderson with 3,788 career all-purpose yards. This senior has played in 44 games and started 21, and currently ranks fifth in school history with 2,367 career rushing yards. Coop led the team in rushing in 2007, 2008 and 2009 and in 2009 set the single season school record with 582 kick-off return yards.

Orlando Franklin
Franklin is the most experienced Hurricane on the 2010 roster, having played in 49 games and started 38 in his career. This senior has been a mainstay on the ‘Canes offensive line at both the tackle and guard positions. In 2009, he earned All-ACC honorable mention honors after grading out at 95 percent with 51 pancake blocks and 13 lumber jacks.

Richard Gordon
Gordon has played in 47 games and started 10 in his career, including seven this season. He has caught nine passes for 58 yards in his career and has played an integral role as a blocking tight end in the ‘Canes offense.

Leonard Hankerson
Hankerson recently broke the school record with his 12th receiving touchdown of the season, passing Michael Irvin’s mark of 11 set in 1986. He currently ranks third all-time at UM with 21 career receiving touchdowns and recently became one of just four players in school history to record 900 receiving yards in a single season. He also joined Irvin and NFL Pro Bowler Andre Johnson as one of just three ‘Canes to ever record back-to-back 800-yard receiving seasons. This year, he leads the ACC and ranks among the national leaders with 958 receiving yards.

Patrick Hill
Hill is in his second full season serving as Miami’s primary fullback and has played in 26 games and started 10 in his career for the ‘Canes. This senior has played an important role as a blocking back for the ‘Canes over the last three seasons. He was a recipient of the Miami Sports Hall of Fame Unsung Hero Award in 2008.

Ryan Hill
Hill has spent time on both sides of the ball in his UM career, playing wide receiver, safety and cornerback over the last four seasons. In 47 career games, he has 33 kick returns for 587 yards, 19 catches for 182 yards, 78 total tackles, seven pass break-ups, three interceptions and two fumble recoveries. He has already earned a degree in Sociology and is currently pursuing a Master’s of Arts and Liberal Studies. Last season, he earned the team’s Community Service Man of the Year Award.

Colin McCarthy
McCarthy has started more games than any defender on the UM roster, garnering 34 starts in 47 career games at linebacker. This senior currently leads the ‘Canes and ranks fourth in the ACC with 95 tackles in 10 games this season. In his career, he has recorded 284 tackles, 31.5 tackles for loss, 4.5 sacks, three interceptions and three forced fumbles.

Cory Nelms
Nelms emerged over the last two seasons as one of team’s top special teams performers. This student-athlete recorded seven tackles in 13 games last season en route to be being named Defensive Scout Team Player of the Year. This year, this senior has played in 10 games and has five tackles and a pass break-up.

Kylan Robinson
Robinson has played in 30 games over the last three seasons, including a start at linebacker earlier this season at Ohio State. An Anchorage, Alaska native and graduate of Tampa’s Chamberlain High School, this student-athlete has 15 tackles in his career, including 11 this season to go along with a fumble recovery.

DeMarcus Van Dyke
Van Dyke has been a mainstay in the Hurricanes’ secondary over the last four years, garnering 21 starts in 48 career games. A Miami native and Monsignor Pace graduate, this student-athlete has recorded 78 tackles, three interceptions and 10 pass break-ups in his career. DVD is one of four ‘Canes with multiple interceptions this season.