New Series: Canes You Have Known and Loved

Share All sharing options for: New Series: Canes You Have Known and Loved

Let me introduce a series of posts that are going to act a bit like a "This Is Your Life" of former Hurricane football players. Notice that I didn't say "football greats," because let's face it, all of you know where the Hurricane greats are: in the NFL, in a TV studio, or in jail/court (sadly).

This series is going to relive the memorable yet forgettable (wrap your mind around that) players that may have slipped your mind since they graced the field.  So, without anymore useless chatter, let me introduce someone very special: 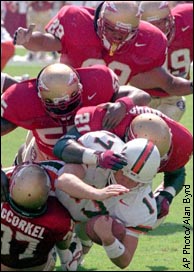 Wait, you don't know who's getting raped in that picture?  I don't blame you.  When I brought him up to David Hill, all he had to say was, "I thought I'd never hear that name ever again in my life, I can barely remember his existence..."

So, in case you thought you would never hear his name again, let me reintroduce to you Andy Crosland, an iron-man of a kicker during the darker years of the program.

Coming out of high school, Crosland was the #1 high school kicker in the nation, went to the U (in the midst of the probation!), and ultimately became a 4 year starter as BOTH the kicker and punter.

Sadly, the memories most people have of Andy are usually far from favorable.  For example, after missing a FG in a VT loss, and then missing 3 XP's in a rout over Rutgers, Butch lost the faith in Crosland and opted not to go for  2 Fg's against FSU (ultimately resulting in another loss).

Of course, your confidence would be shaken too if your own teammate, Dan Morgan, can only say, "I don't really care for kickers too much. You need them for field goals and extra points."  That would probably drive you to a sports psychologist too.

But what you need to remember is that, in one of his braver moments, Crosland got into a scuffle with Lavar Arrington, grabbed his facemask and lived to tell about it (all while drawing a personal foul in the process). Ultimately, Crosland finished his college career 41/61 on FG's.

After graduation, Crosland was signed by the Minnesota Vikings as a free-agent...only to be cut 4 months later.  But, he resurrected himself in the XFL's only season, finishing 4th in FG's (both in FG's made and accuracy) and 6th in Punt average.  When the XFL went defunct, so did Crosland's pro career, sadly.

Little else is known (by me) about Crosland's post-football life, but from what I can tell he is married, has a child, and is now a VP of a real estate company in his home state of Texas.

Andy - Thank you for playing out a full career at the U and taking on that a-hole Arrington when you had the chance.  Congratulations and good luck with what you're doing now.

Commenters: Leave your memories involving our boy Crosland below (good or bad, we're all friends here).