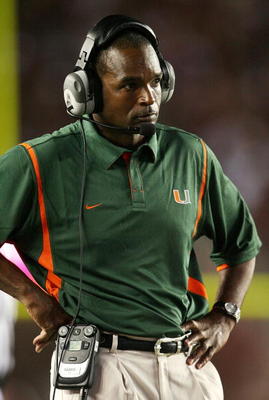 Hey everyone! The season is almost here, and you know what that means: SURLY RANDY. Here's a "conversation" he had with a reporter after Sunday's practice, regarding Latwan Anderson, per Rivals:

Q: What are your plans for him this year?

Q: You guys are at the scholarship limit now?

Q: Do you plan on playing him?

Also per Rivals, is a reported rough draft of the 2010 depth chart:

Other freshmen that were with the second team today and appear poised to play right away: Kacy Rodgers at safety and Kelvin Cain at linebacker.

Another freshman who hopes to get on the field right away is SLB James Gaines, who has gotten second team reps. He's also working in on special teams.

A few surprises here... namely LaRon Byrd on the second team (though it's likely a function of his injury) and the intrepid Kylan Robinson hanging around on the first team.

I have no idea if Todd McShay is a trustworthy voice on college scouting, and frankly I don't care, mostly because he is a noted Jimmy Clausen hater. McShay— or is it Scouts Inc.? I don't really know— recently posted their list of grades for draft eligible juniors and seniors, and as we know, this looks to be the strongest Canes draft class in, like, 5 years. McScouts Inc. has 5 Canes rated in the top 5 of their position group: Allen Bailey as the #2 DE (#9 overall), Orlando Franklin as the #3 OT (#23 overall), Brandon Harris (PLEASE DON'T GO) as the #5 CB (#29 overall), Graig Cooper as the #3 RB (#40 overall) and Matt Bosher as the #3 K, although my sources at ESPN tell me that's a mistake and Bosher is rated as the #3 prospect of all-time.

The class could become even stronger if Damien Berry can prove that his 2009 season was not a fluke and if Leonard Hankerson continues to improve exponentially. And if not, we're still likely to see Allen Bailey picked in the top 10, so whatever.

Tim Reynolds is the AP writer that covers Hurricanes Sports. Here is a story he wrote on Jacory. It mostly details his injury and recovery, but also develops a narrative of off-field Jacory and on-field Jacory aka J12 (although I'm highly partial to SKINNY TESTAVERDE, myself). In any event, I feel like there should be some cape involved.

I'd be remiss to not note that the Sun-Sentinel's Shandel Richardson has moved on from the Hurricanes beat. He will now be covering the Heat, so it's really only a loss for us. In fact, it's mostly an amazing thing for Shandel. Congrats, Shandel, on also getting paid to take your talents to South Beach. His last story, from what I can tell, was on the safety duo of Vaughn Telemaque and Ray Ray Armstrong, which is a pretty damn fine way to go out if you ask me. The two of them seem like good friends.