Share All sharing options for: Bethune-Cookman Game Thread: Will Eduardo Clements Have His Damien Berry Moment? 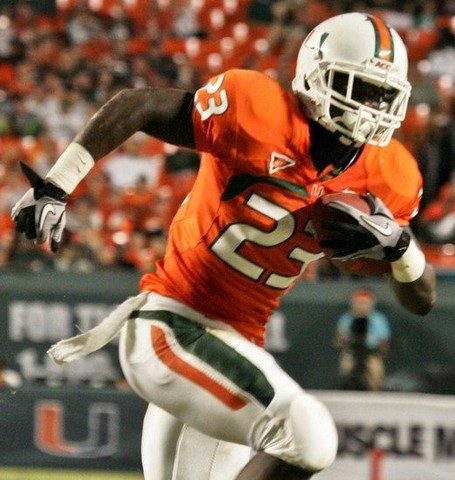 So, Bethune-Cookman. The most notable thing about today's game will— hopefully!— be the opportunity to watch young players like Denzel Perryman and Phillip Dorsett and Thomas Finnie in extended bursts. But maybe the most potentially interesting development is the role of Eduardo Clements. Clements has been yanked around from running back to safety and now back again, but he has yet to see the field for Miami outside of special teams. But with Lamar Miller and Mike James both ailing, Clements could see upwards of 15 carries today. It could be his chance to storm his way into Canes running back rotation much like Damien Berry did in 2009.

There are some definite similarities between Clements and Berry. Both spent time at running back and safety. Like Berry, Clements is a special teams kamikaze, who seems intent on forcing his way onto the field on offense by showing just how much he cares about special teams. Back in 2009, Berry was in the same position as Clements, until the Canes faced Florida A&M and Berry ripped off 162 yards on just 14 yards. (Apropos of nothing, Jacory threw two interceptions in that game. Against FAMU!!) Now, unlike Berry, there's virtually no shot that Clements will become Miami's starting running back. Not with Lamar Miller around. But, Mike James has been surprisingly mediocre this season, and if Clements shows the same force and fearlessness in the backfield as he does on special teams, he may just find himself getting the ball the next time that Miami needs to punch it in from the two yard line.