Share All sharing options for: It's the Seventh Floor NFL Combine Preview

So, the NFL Combine is this week, which allows us to turn our attention towards a football league where UM still experiences some version of relevance, if not dominance. Today we'll be running a preview of the Combine as it pertains to draft-eligible Canes players, and next week we'll run a round-up of how those players actually did at the Combine where we'll reassess draft prospects as warranted. Warning: borderline Allen Bailey slash/fic ahead.

If the old cynics' adage— that the Combine is a place where under-performing physical specimens go to get drafted 20 picks higher than they deserve—  is actually true, then expect to see Bailey shoot back up into the first rounds of mock drafts this time next week. Likely anyone that has been around UM football during Bailey's tenure has a story to tell about how striking it is merely to witness him in person (mine: seeing him as a freshman at a summer practice and legitimately thinking that he was wearing shoulder pads when no one else was), so it wouldn't be surprising to read reports in the coming weeks that gush over Bailey's body. And it's his body that has been his calling card during a career at Miami that featured as many highlight reel moments as it did stretches of anonymity, and at the combine he will be able to showcase his rare combination of elite speed and elite strength amongst defensive ends. Though his position at UM often swung wildly between end and tackle, it's that versatility that may end up being his greatest strength, as he'll have the chance to convince scouts that he can project, as they see fit, as either a 3-4 defensive end or a 3-4 outside linebacker (with some tackle possibly sprinkled in during obvious passing downs). For Bailey to impress, he merely needs to show up, perform in workouts like he can, and let NFL GMs conjure images in their heads of a beastly, potentially game changing defensive player.

Berry— and various other under the radar running backs— have the advantage of playing a position that NFL teams cycle through like paper cups. And that's important for guys like Berry who perform well on the field without showcasing an elite workout skill. As a runner at UM, Berry was used as a downhill, power back, but by NFL standards he's not particularly large. At the Combine he'll need to show that he's maybe a little faster and more agile than people think, as it won't allow Berry the opportunity to showcase his ability to carry the ball ferociously. That said, the fearless Berry could have a future in the NFL as a special teams player who eventually sees some burn at running back if luck falls his way. 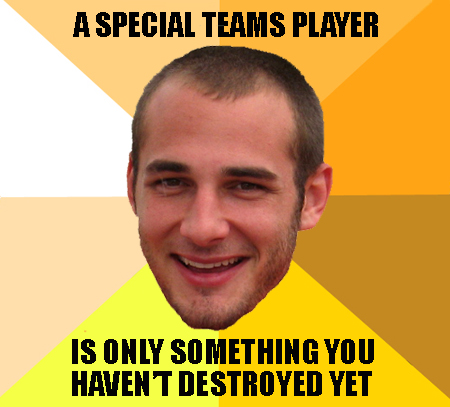 As a three-year punter and kicker at Miami, and an all-conference player at both positions, Bosher was as vital to any of the successes of the Randy Shannon era as just about any single player. He also literally bodyslammed a kick returner on at least five separate occasions that I can recall, though I often fainted immediately after such incidents, so my number may be low. In any event, Bosher is a versatile kicking specialist, though one that lacks an elite talent that could be a calling card at the next level (excepting, of course, the bodyslamming). At the Combine, Bosher's best hope is to impress scouts with his athleticism and do well enough in both field goal kicking and punting to maybe convince a team or two that he can provide depth at both positions. Call it bodyslamming two birds with one stone. 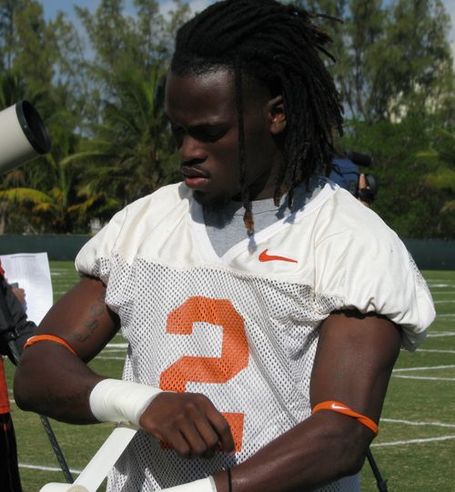 Almost a year after a gruesome ACL tear that likely singlehandedly convinced the (very competent) proprietors of Orlando's Citrus Bowl to do away with natural grass, Cooper first and foremost needs to show scouts that he is fully healthy and has retained agility comparable to his levels pre-injury. Prior to that injury (and yes, I'm still bitter) Cooper possessed both the speed and power necessary to succeed in the NFL, and he was seen in some circles as a borderline high second round pick. The most important event for him at the Combine will be the 40-yard dash, where Cooper could convince scouts that he could see the field immediately as a kick returner, or even a third down back (likewise, he'll need to show the ability to run routes/catch the ball out of the backfield). If healthy, a good performance in Indianapolis this week could have Cooper on the radar as a potential running back steal. 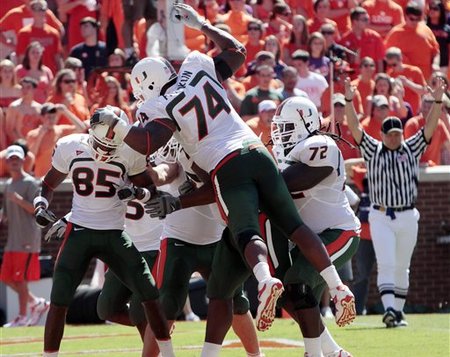 Franklin took a lot of flak this past season (often times with good reason) for his inconsistent play at left tackle, but he's amongst a host of players in the Shannon era that had their careers distorted by being forced to play out of position. In the NFL, Franklin will play guard, and he will likely be a good one, as he excelled there at UM before being forced to move over. At the combine he should put up strength numbers satisfactory for a guard, and he should also solidify his standing as a mid-round pick who could see playing time immediately next season. But there is still more at stake for Franklin, who could use shuttle drills to show scouts that he has the agility, and ability, to potentially fill in at right tackle in the NFL. If successful, he could potentially boost his stock by a full round. 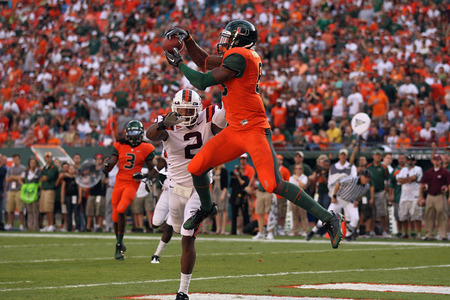 If Bailey is the player who can use the Combine to paper over his college career, then Hankerson is the player whose agent will be making the rounds in Indianapolis handing out highlight footage of his days at UM. Hankerson's strengths as a receiver— route-running and positioning his body against smaller corners (as evidenced in his touchdown catch at the Senior Bowl and his third touchdown catch in this past year's game versus Clemson, respectively)— aren't exactly two skills made for the Combine. Hankerson's goal in Indianapolis is, in a manner of speaking, to be utterly forgettable. While he may run faster or show more agility than scouts expect, his job is to give teams no reason to doubt that his consistent (and record breaking) production at UM can translate to the pros. If he can accomplish merely that, he may find his prospects looking up even further in a draft that is relatively weak at the wide receiver position. 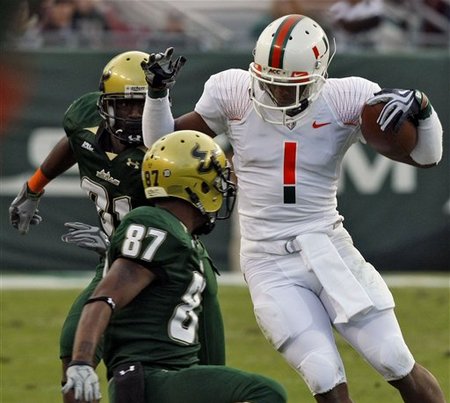 While the coaching change at UM seemed to all but spell the certain departure of Harris, he actually took a slight risk in deciding to enter a draft that is heavy on quality corners. Barring a disastrous showing in Indianapolis, Harris is certain to be picked in the first two rounds of the draft, but the Combine will provide him the opportunity to potentially sneak up into the bottom of the first round, if not higher. Harris possess size and speed that is just below what you'd look for in an elite NFL corner, but he's a smart player who isn't afraid to lower his shoulder in run support (which manifested itself most notably in his epic game saving fourth down stop in this past season's game against Clemson). At the combine he'll need to run his 40 in the 4.4/low-4.5 range (which he is more than capable of doing), but more importantly he'll need to use the workouts to show that he has satisfactory quickness and agility. While that may be a surprise for a small, fast corner, Harris has had problems from time to time with equally small and fast receivers like Duke's Donovan Varner (he also has trouble defending slant routes— think Michael Floyd's 3rd and 15 conversion in the Sun Bowl), and he'll need to show that he can turn his hips adequately. He'll also need to perform well in the vertical jump, as he's had issues at times with going up for jump balls against taller receivers.

Like Franklin and Bailey, McCarthy is another player who was asked to play out of position at UM. As a middle linebacker for the Canes, McCarthy racked up a high number of tackles, but he also was often out position defending the run, and was mostly abjectly awful in coverage (recall Wisconsin using the TE to carve up the Miami D in the 2009 Champs Sports Bowl). At the Combine, McCarthy should perform adequately in strength drills, but he'll need to show in cone and shuttle drills that he has the change of direction necessary to cover running backs at the NFL level. If he can, he projects as a solid two-down 4-3 outside linebacker, but if not, he may find himself confined to special teams and emergency situations.

Unfortunately for DVD, there's no workout at the Combine that measures how funny your teammates find you. Though he was an off-and-on starter for three years, his impact at UM was largely non-existent, and he goes into the Combine as a blank canvas. But if there's any draft eligible Cane with Jimmy Graham/Sam Shields potential, it's DVD. As a member of Miami Track's record breaking 4x4 relay team, Van Dyke was one of the fastest players on the football team, and as a corner he possess exceptional height, though he needs to get stronger. He should blaze the 40 in Indianapolis, and if he can prove that he can get out of his breaks better than average, he may find himself sneaking into the bottom rounds of the draft. And if that happens, an NFL team may find that proper coaching might be able to access DVD's untapped potential.