Share All sharing options for: It's the Seventh Floor NFL Combine Review 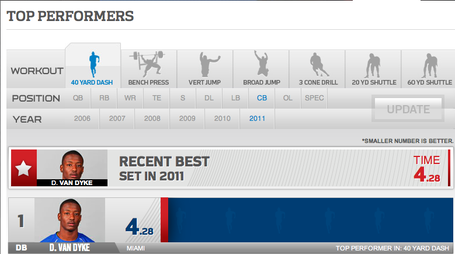 So the NFL Combine is over. DeMarcus Van Dyke was the fastest player at the entire combine. He is also the fastest defensive back at the Combine since at least the year 2000. He may will not end up being Deion Sanders, but it's impressive nonetheless.

Analysis of all other Canes after the jump: 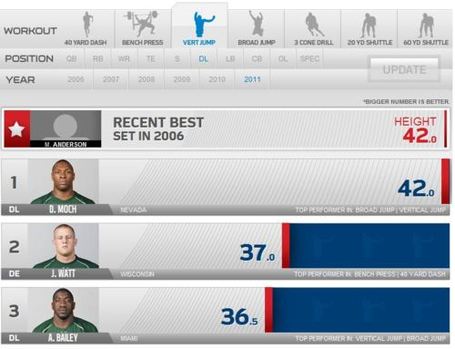 Bailey had a chance to rocket up draft boards this week, but that likely didn't happen. That said, he did have a solid combine, posting a 40 time in the 4.7 range and finishing among the top five defensive linemen in the vertical jump, the latter of which indicates above-average explosiveness. While Bailey likely didn't do much to convince scouts that he could be a full-time 3-4 OLB, his across the board numbers still indicate the potential for an unusual type of diversity that a creative 3-4 defensive coordinator could use to his advantage.

Berry didn't have a spectacular combine either, but he did post high marks amongst running backs in the both the broad jump (10') and the bench press (23 reps of 225 pounds), both of which demonstrate that he may be able to serve as a power back in the NFL. He also was a top performer in the 20-yard-shuttle, which speaks to a quickness that is slightly abnormal for a running back with his strength. On the other hand, his speed numbers were underwhelming and he will likely have to run under a 4.6 in the 40 at the UM Pro Day to jump back up into draft consideration.

Combine information for specialists is not currently available, so we'll update when we have it. It's also possible that Bosher was banned from the Combine for safety purposes. 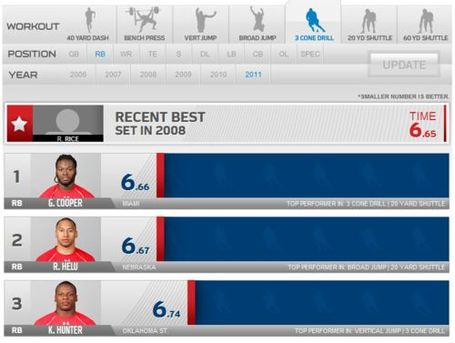 Cooper had a solid combine. Most NFL teams currently see him as a change of pace or third down back, and to that end he performed well in the necessary drills. Though his 40 time (in the 4.6 range) wasn't great, he was tops amongst running backs in the three-cone drill (and .001 seconds off of Baltimore's Ray Rice's all-time record) and second amongst running backs in the 20-yard shuffle, both of which indicate that he has full agility back after his ACL tear. While Cooper didn't blow anyone away (especially without a blazing 40 time), he likely solidified himself as a third or fourth round selection, which isn't the worst possible outcome after his horrific knee injury.

Franklin had minimal impact at the Combine. His 40-yard dash time was tenth amongst offensive linemen, but he was in the middle of the pack in all other categories. That said his game tape is still very good, and he should still be drafted in the middle rounds. 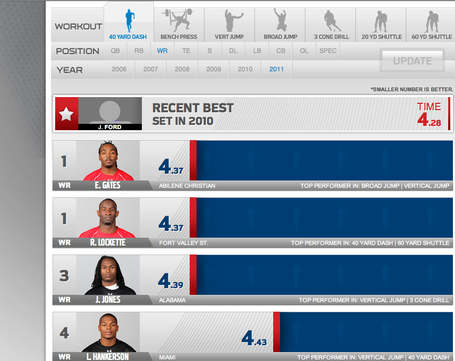 Hankerson was one of the big overall winners of the Combine. Coming into Indianapolis with questions about his overall speed, Hankerson needed to run a good 40 time (say, in the 4.5 range) to solidify his grade as a second round pick. Well, he ran a 4.43, which was fourth overall amongst WRs, and second only to Alabama's Julio Jones amongst receivers with high round grades. Hankerson also was in the top 15 in the vertical jump, but it's the 40 time that might help him sneak up into the bottom of the first round. Hankerson, and his agent, likely left Indianapolis beaming.

Harris posted an unofficial 4.44 in the 40, thought that was downgraded somewhat when official times were posted. Harris also measured a bit shorter than he was listed (5' 10", instead of 5' 11"), but overall he turned in a solid combine that will allow himself to be judged merely on his game tape. Some projections have Harris inside the top 15 picks, while some have him out of the first round entirely, but regardless he likely won't last through the first 40 overall picks.

Note: Results for the DBs in the other Combine drills are not yet available, though we'll update this post if anything pertinent arises. 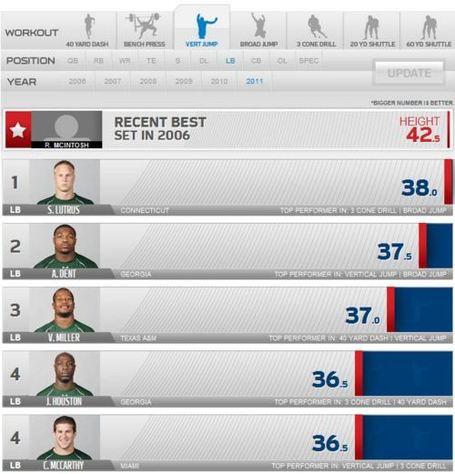 McCarthy also had a very good combine. McCarthy stood out especially in drills that measure athleticism (vertical jump, cone drills), which was important for him as he tries to help scouts envision him as an outside linebacker capable of covering NFL running backs and tight ends. McCarthy likely helped himself keep a mid-round grade, and in all he finished in the top 10 amongst linebackers in the following categories: 40-yard dash, bench press, vertical jump, broad jump, three-cone drill, 20-yard shuttle, 60-yard shuttle. 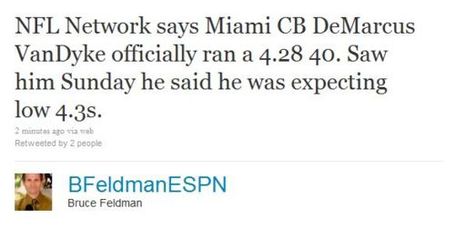 As indicated above, Van Dyke was the fastest overall player at the Combine, and his 40 time was only .004 seconds off the all-time record set by the Titans' Chris Johnson. Everyone knows that DVD is fast, but needless to say, this is still an eye-popping result. If DVD can perform well in agility drills, he might see himself drafted in the fifth or sixth round, which based on his college career, would be an astounding turn of events.