The Connect: In non-arrest news...

Share All sharing options for: The Connect: In non-arrest news... 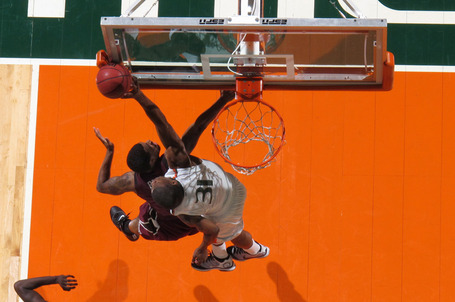 The men's basketball team is a win away from the Final Four! The fact that it's of course the NIT Final Four is immaterial for a school with no basketball tradition to speak of. Or at least that's what we'll keep telling ourselves. In any event, the men will play tonight at 9 pm EST at Alabama on ESPN2 for a chance to go to Madison Square Garden. We'll have a game thread, which is a sure jinx if there ever was one.

There are things that we all do once every few weeks. Go out to dinner. Mow the lawn. Exercise. Contemplate the meaning of life etc. For Al Golden, it's apparently "make a new depth chart," because, yes, there's another one. And I'm sad to report that the Spencer Whipple Era was short-lived. Full new depth chart (plus a position change) after the jump:

A few notes notes re the depth chart: Eduardo Clements has been moved to DB, Travis Williams has taken Ramon Buchanan's spot in the starting line up, Jordan Futch has been moved to OLB and Olsen Pierre has been moved (at least temporarily) inside. Also, Ray Ray is back practicing.

Oregon head coach Chip Kelly and ex-BC head coach Jeff Jagodzinski were at practice yesterday. Kelly was probably slightly disgusted by the proceedings, while Jagodzinski, who was fired this past year by the UFL's Omaha Nighthawks, was likely happy that someone was allowing him near a football practice again.

Lastly, the third seeded women's basketball team lost 88-83 last night in the second round of the women's tournament to sixth seeded Oklahoma. Though they clearly went out later than they would've liked or their seed indicated, the co-ACC champions put up one of the best seasons in the program's history. From what I understand, they will return all players next year, which means they have a leg up on being the school's most successful program once again in 2012.