Share All sharing options for: 2010-2011 Men's Basketball: A Player-by-Player Review

In part two of our award winning and critically acclaimed two-part series on the Miami Hurricanes Men's Basketball 2010-2011 season, we're analyzing how each player performed this past season, what they can do to further improve their games and what we can expect from them next season. This is probably unnecessarily long, so apologies in advance.

Adams' numbers picked up this year with increased minutes, but more importantly, his scoring also picked up on a per 40 minute basis (9 points per 40 in 2010 vs 10.3 per 40 in 2011). Likewise, his numbers across the board, including shooting percentages, also all improved slightly between this year and last. That said, Adams is still not particularly great at anything, and his shooting numbers (38% FG, 30% 3 PT and 68% FT) are pretty poor. But Adams was still an effective player at times, scoring in double figures in seven ACC games including 14 points on 4 of 6 shooting from behind the arc at Clemson. With DeQuan Jones both injured and still taking baby steps on offense and Adrian Thomas departing the team, Adams is the only small forward on the Canes that is willing and able to drive to the basket and finish (at times). If he can improve his jump shot and become more consistent on a game-to-game basis, Adams can provide a dimension that the UM offense has been searching for ever since Frank Haith took over.

At 6' 8", 230 pounds, Akpejiori was not physically ready to play college basketball this year, but he was thrust into game action when the injury to DeQuan Jones and transfer of Donovan Kirk thinned Miami's frontline to the bone. Akpejiori didn't show much in the few minutes that he did play, and he only saw 8 total minutes in Miami's last 15 games. The off-season goal for Akpejiori is to put on around 20 pounds so that he can at least be an adequate banger down low, and if more strength means more playing time, he may have the chance to flash whatever offensive skills he hid this year. 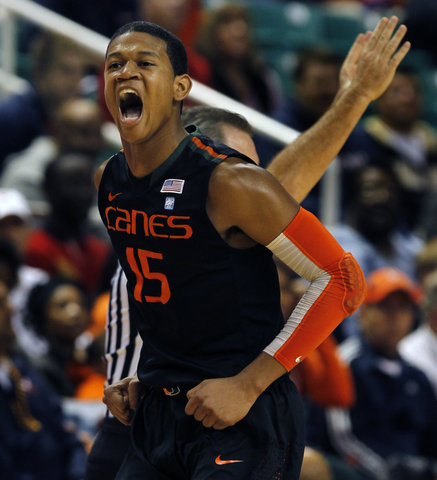 Rated four stars and as one of the top 70 high school players in the country by Rivals in 2010, Brown stands with DeQuan Jones and Durand Scott as the biggest recruits in the Frank Haith Era. Haith and his staff strove to get Brown acclimated to ACC play, and he started seeing major minutes on a consistent basis five games into the conference schedule. He spent much of that early playing time swinging the ball around the perimeter, hoisting up rushed three pointers and generally looking like a freshman that was trying his best to disappear while on the court. But Brown eventually woke up, most notably when his three point shooting fueled a miracle last minute comeback at home against Virginia. As the season wore on, Brown sported a refined shooting stroke and exuded the confidence of a player who had become comfortable playing at the college level. As the season wore on he poured in 19 points against Maryland and dropped in three first half three pointers in the ACC tournament against Virginia. His play was at times the most heartening development as the Canes season wore on, and if he improves his game this off-season, he may find himself in the starting line up as a true two guard, a role that Haith's team desperately needs filled.

2011 confirmed that Gamble is what he is. Though he can from time to time flash a surprisingly accomplished offensive move, Gamble is mostly a big body who is around to protect the rim. As far as that goes, he's pretty good, and the negative aspects of his game will be minimized if the Canes can develop another offensive-minded big man to go along with Reggie Johnson. Gamble oftentimes helps make up for Johnson's lackluster defense, and though he'll never be a threat on the offensive end, he fills his role quite well.

Grant is flat out one of the best long range shooters in the ACC. That said, and despite the fact that he increased his shooting percentages this season, he doesn't really bring much else to the table. His assist to turnover ratio fell slightly this year to a very mediocre 1.3 and his height means that he often has trouble finishing at the rim. His height also presents a problem on defense, where he has trouble defending bigger guards. Pairing him with Durand Scott in the starting backcourt is probably not a winning recipe (especially on the defensive end), and if Haith is smart he'll insert Rion Brown into the line up as a true two guard and let Grant fill Adrian Thomas' role of off-the-bench sharpshooter. Of course, Grant could improve his ball handling and overall point guard skills in the off season, but if Jack McClinton's experiment in that area taught us anything it's that point guard is not a position that you can force on somebody. Either it's there or it's not, and with Grant it's not, but that doesn't mean he can't be extremely valuable to this team.

In the 2010-2011 season, Reggie Johnson was one of the outright best and most efficient players in the ACC. John Hollinger's Player Efficiency Rating had Johnson ranked as the second best player in the conference, and Johnson was also ranked second in Ken Pomeroy's offensive efficiency ratings. Right now Reggie's most obvious problem is that his penchant for fouling means that he's not on the floor as much as he could or should be, and that slightly dulls his impact. The fouling issue is one that will probably never be alleviated because even though Johnson is a remarkably agile guy for someone who weighs about 300 pounds, he has a problem where he can't really jump. This manifests itself on offense (he rarely dunks the ball, despite accompanying video evidence) but more importantly on defense it means that he has trouble blocking and altering shots and too often will get caught hacking at an opponent's arm. That said, Reggie is still plenty valuable at the moment, as he's probably the best offensive rebounder in America now that Kenneth Faried has graduated and his back to the basket game is incredibly polished. If Johnson can add a face up dimension to his game— and as a respectable foul shooter, this is certainly within the realm of possibility— he could become nearly unstoppable (it would also improve his pro stock). Johnson is known as a hard worker, so hopefully he can take the next step in this coming season.

Unfortunately for DJ, the 2010-2011 was a lost season for him. After breaking his hand against Boston College, he missed the bulk of the ACC season and didn't see consistent minutes again until post-season play. Not only did his injury hurt Miami's depth, but after a near breakout performance in last year's ACC Tournament, it looked like this year could be the one where Jones put some of it, if not all of it, together. At this point in his career, the idea of Jones being an all-around dominant player is a pipe dream, but he's not nearly the lost cause he once looked to be. As a defender, Jones is already a game changer. His athleticism means that he can easily guard small forwards, and his height and leaping ability allow him to be a force under the basket. And although his offensive highlights of the year mostly consistent of random dunks— most notably is around-the-world fast break jam against Alabama seen above— his defending of Kyle Singler at Cameron Indoor was one of the season's most impressive individual performances by any Cane. The truth of the matter is that while it would be great for DJ to become a consistent threat on offense, Miami probably doesn't need to rely on much scoring from anyone outside of Brown, Grant, Johnson and Durand Scott. So while Jones has the athleticism to be a player not unlike Arizona star Derrick Williams, he can be plenty valuable as the Canes' (defensive) version of Josh Smith or Andrei Kirilenko.

Last year, Scott had probably the best freshman campaign of any player in the Frank Haith era. His game— driving to the basket and finishing in oftentimes outrageous fashions— was pretty well defined, but he did make some noticeable improvements this year. In 2009-2010, Scott shot 67% from the free throw line, but this year he bumped that up to 83%, and for someone who gets to the line as much he does, that improvement did not go unnoticed. Maybe more importantly, he drastically improved his three point shooting percentage from 27% to 39%, meaning not only can defenders no longer sag off of him, but they also can't abandon him when he doesn't have the ball. Scott can still improve his ball handling and man-to-man defense, but he's a player whose performance you can almost always count on. He's a notorious gym rat and he also seems to be the emotional leader of the team, and it wouldn't be a surprise if Scott was an All-ACC guard next season.

Swoope is, to put it nicely, an interesting player. As a 6-6 power forward, he's the type of extreme project that a program like Miami can pick up if it sees potential. He seems completely undersized for the ACC, but he can jump quite a bit and plays bigger than he is. He's too small to really have much of an impact on offense unless he adds a consistent jump shot to his repertoire, but he might have a future at UM as a scrapper that picks up some rebounds. With the addition of the 6-11 transfer Kenny Kadji, Swoope shouldn't see much of the court next season unless the Canes are in extreme foul trouble, but down the road he could be a smart, sound banger not completely unlike Jimmy Graham. And yeah, Swoope might want to try tight end one of these days.