As UM football continues to slog towards Labor Day night, we here at the 7th Floor will breakdown each position group on the team. (For the record, I stole this idea from the enviable SBN blog Rock M Nation.) Today we start with the quarterbacks, god bless our hearts.

Expectations for the quarterback position at the school once called "Quarterback U" understandably loom large. Probably too large. After the departure of Ken Dorsey (*points to the sky*), fan expectations have been wildly mismatched with the play on the field. Brock Berlin, at one point in his life the hottest quarterback prospect in America, transferred in with expectations of continuing a dynasty, but was merely able to take Miami to its last BCS bowl (sounds nice, right?). Kyle Wright, at one point in his life also the hottest quarterback prospect in America, was up next with expectations of restoring that dynasty, but was merely able to keep Miami within sniffing distance of a top five ranking (sounds nice, right?). For everyone's sanity we will skip over any involvement from Kirby Freeman and Robert Marve and fast forward to 2009, when a gawky hometown kid named Jacory Harris stepped onto the field at Doak Campbell Stadium as Miami's starting quarterback...

Barring a miracle turnaround under the direction of Jedd Fisch, Jacory Harris' career will forever be a victim of off-season expectations and preseason rankings. When he started off the season in 2009 by throwing for 656 yards and 5 touchdowns against two teams ranked in the top 20, national pundits saw a potential Heisman Trophy winner and Hurricane fans saw national championship trophies. But one of those teams (Florida State) would finish the season with a 6-6 record and without their defensive coordinator, and the other (Georgia Tech) would eventually win the ACC, but with a defense that was mediocre at best. In retrospect it was ridiculously silly to anoint Harris as Miami's savior, but such were the circumstances for a program desperately seeking a savior. Those delusions died somewhere in Columbus, Ohio and in 2011 expectations for Harris are essentially nonexistent. Indications seem to be that Harris has been impressive this spring and will likely begin the year as the starter, and if Harris can throw more touchdowns than interceptions, the season should be deemed a success. Jedd Fisch's West Coast offense will likely suit Harris' skillset more than Mark Whipple's "40-yard heave and a cloud of dust" designs, so he will be put in a position to succeed. Harris' most recent game as a Hurricane against Notre Dame was an unmitigated disaster and easily the worst game of his career. He looked as if he was viewing the field through a peephole, unsure of who or what to throw to or why or really what game he was even playing ("Football, right? I'm a football player?"). This coming season's low expectations should free him mentally, and with proper coaching 2011 could potentially be his most successful year at Miami, all told. 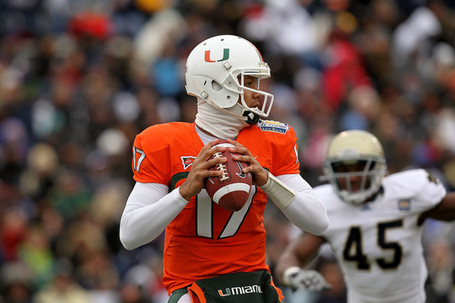 Morris is the latest Hurricane quarterback to wear the robe of incoming savior. He undoubtedly flashed enormous potential at times in games against Virginia and Maryland, but he often looked like a freshman. Morris' combination of arm strength and mobility is something that Miami hasn't had in years. That said, Morris was allegedly "hand-picked" by Whipple as his quarterback of the future, and his skillset is not unlike Whipple protege Ben Roethlisberger. How Morris fits into Fisch's offense remains to be seen, and word is that he's been outplayed by Harris this spring. That said, Morris will likely see the field at some point this season, and if he can further even out the distribution of potential and results, he may be able to hold off Fisch's handpicked recruits.

If Whipple sees any meaningful playing time this year, the season will have gone horribly wrong and I will likely have jumped off of a tall building. Whipple will be the likely holder on field goals and extra points, so hopefully he can handle that. His future beyond coaching though does not exist.