Share All sharing options for: The Guiding Lights: 2011 RB Breakdown 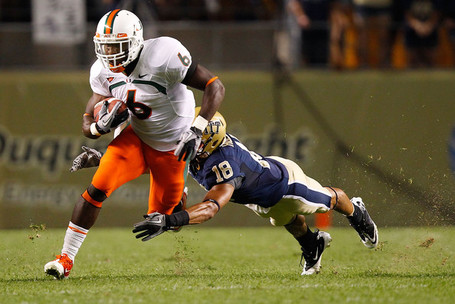 As UM football continues to slog towards Labor Day night, we here at the 7th Floor will breakdown each position group on the team. (For the record, I stole this idea from the enviable SBN blog Rock M Nation.) Today we look at the running backs, the Cristal to the offense's stale beer.

Clinton Portis. Willis McGahee. Frank Gore. The shadows loom large, and the total touchdowns and accolades even larger. Miami's offense has always been at its best when the engine of the machine is a star running back (or three). And if anything positive can be gleaned from Randy Shannon's ill-fated reign as head coach, it's that while he may have taken the university's riches, he left a treasure chest of running back talent behind.

Hagens was recruited to Miami as a fullback under the past regime, but fullback is an obsolete, if not extinct, position in Jedd Fisch's offense, and as such Hagens has been transitioned to running back. Though this wasn't the ideal outcome for him, he's not necessarily a bird without a nest. The Miami running back corps is very talented, but if there's one thing they aren't, it's supremely big, and that's where Hagens fits in. He'll probably only get burn on special teams and as a lead blocker on extreme short yardage situations to begin the season, but if Miami's backs have trouble converting in those situations, Hagens might find himself with the ball in his hands with instructions to piledrive.

Of the three true running back recruits in Randy Shannon's final recruiting class, Hall was by far the least heralded. At 5' 11" and 195 pounds, Hall isn't particularly big, nor is he particularly fast or agile. That said, it's hard not to see a little bit of Damien Berry in Hall, who runs both fearlessly and a liiiiitle too upright. Barring major injury, Hall likely won't see the field this year outside of the depths of garbage time. 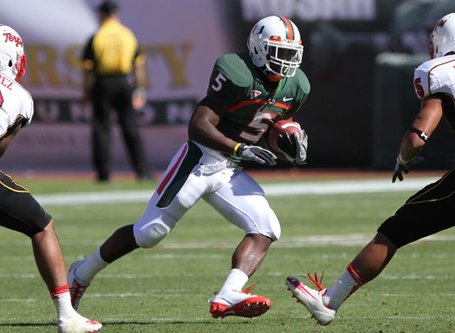 James is nothing if not a study in perseverance. As a freshman, he came to Miami as an under-the-radar recruit at a position stocked with elder statesmen like Graig Cooper and Javarris James. When he was asked to help out at fullback after an injury to Pat Hill, he obliged, and soon found himself as a starter at that position, able to show off his versatility. As a sophomore, it seemed as if James would be passed over by younger, more hyped talent like Lamar Miller and Eduardo Clements, but James manged to stay on the heels of the former while he dispatched the latter into the thick groves of UM's defensive backfield. As a junior he has endeared himself to head coach Al Golden, finding himself atop the depth chart in a move that looks increasingly less like a motivational ploy and more like a proper anointment. James is Miami's biggest pure running back and he's also the most polished, having long proven his bonafides as a blocker and receiver. He isn't nearly as flashy as Miller, but James gobbles up yards all the same, and though he's unlikely to find fans wearing his jersey, he may just be the offense's vital organ.

Johnson was one of 2010's great enigmas. As he toiled the season away only seeing the field as a kick returner, many Canes fans wondered why Randy Shannon was wasting the touted running back's freshman year. When Johnson— fueled by the same exasperation and desperation that led Randy Shannon to put him in the game in the first place— broke off a 71-yard touchdown run against USF that nearly saved his coach's career, those same fans wondered why Johnson had been buried on the bench all year. Johnson and his family were apparently asking the same questions, as his father recently told the Miami Herald's Barry Jackson that his son would've transferred had Shannon not been fired. Playing time shouldn't be much of an issue for Johnson this season, as he's firmly entrenched in UM's running back rotation. He lacks the chrome finish of James and the breakaway ability of Lamar Miller, but he'll find a home as a runner that is both deceptively powerful and deceptively quick. How much time he sees will likely rest on how he develops as a blocker and pass catcher.

Miller is quite plainly the most talented and exciting running back that UM has had since Frank Gore was ripping off 60-yard runs in garbage time in 2002. Though I don't believe that he'll emerge as the nominal starter, he should bear the load of the carries in the coming season, and if he progresses at the rate that he did last year, he may be the best running back in the ACC. If Miller can continue to hone his skills as a pass catcher and, god willing, stay healthy (a moment of silence for both of Gore's ACLs), his potential at UM is almost limitless. Fisch's offense is analogous to, if not modeled after, Pete Carroll's offenses at USC, and with Miller's world class speed (and history as a gamebreaker on special teams) we might be looking at our very own version of Reggie Bush. I'm sorry, I tried to stop myself.