Catching the Ball, How Does it Work?: 2011 WR Breakdown

Share All sharing options for: Catching the Ball, How Does it Work?: 2011 WR Breakdown

As UM football continues to slog towards Labor Day night, we here at the 7th Floor will breakdown each position group on the team. (For the record, I stole this idea from the enviable SBN blog Rock M Nation.) Today we look at the wide receivers, the children with honor roll potential that keep turning up C's.

Last year was supposed to be a breakout season for many of the young Miami receivers, but that was a promise that was left unfulfilled. Leonard Hankerson of course had arguably the best receiving season in the history of the program, but his play left an odd chicken/egg question for Miami fans: Was the offense's reliance on Hankerson due to lack of progress by the younger receivers, or did Hankerson's breakout season stunt— or mask— any progress? We'll find out this season, where the ball will (literally) be in the hands of a once touted group that features many more question marks than answers.

Though Benjamin is a productive (and at times transcendent) receiver, my feeling is that he'll be put to better use in the NFL than he has been at Miami. The main reason starts at quarterback, where Jacory Harris' lack of supreme arm strength hampers Benjamin's ability to be a downfield burner. When Benjamin was blamed last season by Randy Shannon for not fighting hard enough on jump balls, it felt like one of the lowest (off the field) moments of Shannon's tenure, as it was plainly clear that the problem was underthrown deep balls to a 5' 10" receiver, not that receiver's ability to fight for the ball in traffic. That said, Benjamin did have issues with dropped balls, not to mention his immortal mistake against Ohio State, but those mental mistakes also seem like a function of fundamental misuse (namely treating Benjamin like a possession receiver) under Mark Whipple. Without a Leonard Hankerson to work off of, 2011 might be a slightly less fruitful year for Benjamin, though we'll see if Jedd Fisch can find ways to get him open in space on a consistent basis. All told though, Benjamin can outrun any coverage, and in the NFL he might just find a quarterback than can out-throw it. 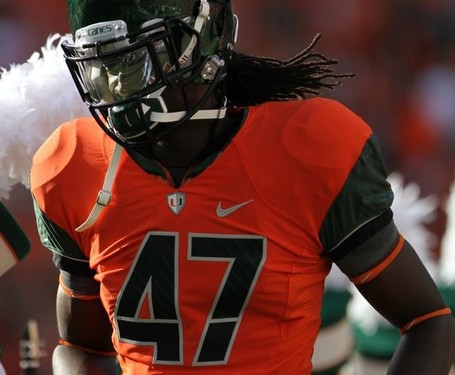 2010 was a disappointing year for Byrd. Though he was Miami's third leading receiver, the season signified lateral progression in his development, if not a marked regression. Though he doesn't have top-end speed, he has ideal size for a receiver and is fast enough to be a very good college receiver. 2011 could still be a big year for Byrd though, as one could argue that his role on the team as go-to possession receiver was filled wholesale last year by Leonard Hankerson. At the very least, Byrd should see an uptick in his touchdowns, as he seems to be Miami's best red zone option in the passing game until Tommy Streeter or one of the young tight ends proves otherwise. Byrd was long believed by the Shannon regime to be the best pro WR prospect on Miami's roster, and though that doesn't seem quite right, it's undeniable that Byrd has the skills to leave his mark on 2011.

Hurns' 2010 season was a curious one. He began to see the field increasingly towards the end of the year, but he never once caught a pass (and to my recollection was never even targeted). A cynical reading of the situation would be that Randy Shannon was inserting Hurns into the game simply to spite (or motivate) alleged underachievers like Kendal Thompkins and Tommy Streeter, and it did seem like Hurns had become one of Shannon's favorite young players. That being said, it remains to be seen what Hurns can offer in the passing game. He was an unheralded recruit, but has good size for a receiver (though he does need to fill out) and, from what I can tell, decent speed. It's doubtful that with the new regime's open arms to Thompkins and, to an extent, Streeter that Hurns will see much playing time this season, but his quietly workmanlike production in this past weekend's spring game indicates that he may be a valuable third or fourth option come 2012 and beyond.

Johnson's trajectory at Miami seems directly related to that of Jacory Harris, which makes sense, as the two were touted as the dream QB/WR combo of 2006's vaunted Northwestern recruiting class. Clearly, that hype has not and will not be fulfilled, and it's unclear what if any role Johnson will play on this year's team. He's been injured all spring and seems to have been passed on the depth chart by younger players like Thompkins and Streeter. Johnson has limited big play potential, and his production at UM has been almost completely limited to comeback routes along the sideline. His size could potentially make him valuable in Fisch's offense (think Dwayne Jarrett), but that would be ascribing more production to Johnson than he's shown, barring maybe his freshman year. It's more likely that he gets lost in the shuffle of a coaching change, not unlike Lance Leggett did in 2007.

Aside from a first half touchdown catch against Duke in his freshman year, Johnson's career at UM has been nonexistent. He's been hurt this spring and has likely not had a chance to make any impact on the new coaching staff, and it's doubtful that he sees any playing time this year. His best hope is to help fill the void in his senior season after the departures of Benjamin, Byrd and Aldarius Johnson. 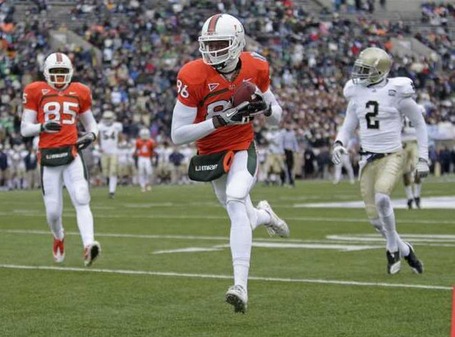 Streeter is the great wild card of the Miami recruiting corps, if not the entire offense itself. Standing at 6' 5" and with speed that compares to that of Travis Benjamin, Streeter's physical talents are undeniable. But he's had trouble getting on the field in his career due to persistent whispers about his mental approach to the game, be it in route-running or effort. While part of his lack of playing time can likely be attributed to Randy Shannon's notoriously deep doghouse, Streeter has also yet to shake his reputation under Al Golden. If the new coaching staff can turn Streeter into anywhere near the dominating force that he threatens to be, it could be the prime example of their ability to motivate players better than the last staff. But if 2011 is another lost year for the Andre Johnson-like talent, it will be obvious whose fault it is.

When it comes to Randy Shannon's aforementioned doghouse, Tommy Streeter had a roommate, and it was Kendal Thompkins. But Thompkins was an even more curious case than Streeter, where there was little to no secret as to why he wasn't playing. Thompkins was being constantly praised in the press by fellow players, and even more importantly, his role in the Miami offense was left unfulfilled. Though there were a few things wrong with last year's offense, one of the more unspoken-of absences was the lack of a slot receiver after the departure of Thearon Collier, and that was with a seemingly perfect fit in Thompkins left riding the bench. Thompkins has ascended the depth chart under Al Golden and he will see significant time on the field for the first time in his Miami career.

Dorsett has the skills to be a contributor as a freshman, but barring major injury or ineffectiveness by the players ahead of him, it's unlikely that he'll see the field, and there's really no point in burning his freshman year. As his career progresses though, Dorsett is a small, quick and fast receiver that should fill the hole left by Travis Benjamin (and before him players like Roscoe Parrish and Sinorice Moss) both on the offensive side of the ball and on special teams.

Scott is a player that was lightly recruited by major FBS programs and didn't seriously factor in Miami's recruiting until after Al Golden was hired. Scott isn't extraordinarily fast, but at 6' 2" he has good size for a receiver. He's raw at the moment and is an obvious redshirt candidate, but in the future he could blossom into a Leonard Hankerson-type player.