Seantrel and the Other Guys: 2011 OT Breakdown

Share All sharing options for: Seantrel and the Other Guys: 2011 OT Breakdown

As UM football continues to slog towards Labor Day night, we here at the 7th Floor will breakdown each position group on the team. (For the record, I stole this idea from the enviable SBN blog Rock M Nation.) Today we look at the offensive tackles, the mammoth beasts roaming the barren plains of Miami's offense.

If a strong offensive line is really the cornerstone of a great offense, then the team's offensive MVP might end up being the recruiting efforts of Randy Shannon (personified by a face showing a unique mixture of contempt and fatherly warmth). Shannon has left the offensive tackle cupboard bursting with big, athletic, talented bodies, and after years of shifting guards over to tackle (to often disastrous results) the 2011 Canes feature three potential stars at a position where only two can play.

Barton was tagged as a project coming out of St. Thomas Aquinas, a raw and unpolished tackle that had, at the very least, the body to potentially morph into a solid player, if not a star. At the moment, there is no rush on his development, as Miami is well stocked at the position, not to mention that he still needs to put on at least 20 pounds. He's not currently listed on the two-deep depth chart, but will likely see some time on special teams this year with an eye on a larger role two or three years down the line.

Bunche has maintained his spot as the first team offensive tackle throughout the spring, and while he still has a long way to go to fully beat out Seantrel Henderson, his ascension to the top of the depth chart is no joke. Bunche came to Miami as a four star prep school recruit, and as a tackle he has ideal size and mobility. Though he didn't see the field last year, that hasn't seem to hurt him this spring, and Bunche might be the at the top of the list of players that have benefited from the coaching change at UM.

This spring has been a rough one for Seantrel. Not only has he had to deal with a rash of injuries, but he's clearly being pushed hard by the new staff, and has seemingly yet to satisfy them. This off-season will also likely cement Henderson's reputation at UM going forward. His talent is beyond reproach, but like a lot supremely talented players who were able to coast on ability alone in high school, it seems as if the new coaching staff is still working to get Henderson to work as consistently hard as his less talented peers. That said, it would be about suicidal for Golden not to start Henderson on the line this year, excepting his purported yet unconfirmed suspension for the season's opening game against Maryland. Henderson played admirably as a freshman last year, and though he had his fair share of (understandable) mistakes, he gained valuable experience while being an important contributor to the offense. His loss of roughly 30 pounds should help his mobility this year, and he will become increasingly dominant as he hones the finer skills (footwork, hand placement etc) of the position. Barring a catastrophic knee injury, it seems extremely likely that Henderson will enter the NFL Draft after his junior season, so the coaching staff might want to get Henderson on the field while they still have him. 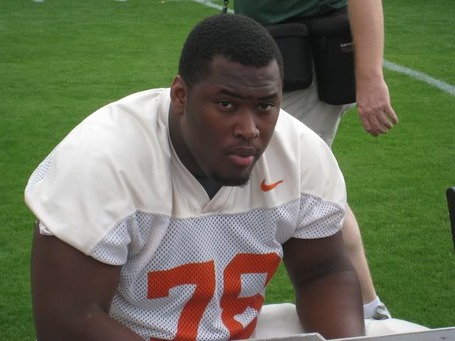 Johnson is another of Miami's absolutely massive tackles. He isn't as talented as Seantrel Henderson, but he had a solid and at times dominant season last year. It seems that with Henderson and Malcom Bunche battling for the starting left tackle position that Johnson has been handed the keys to the right tackle position at UM for the remainder of his career assuming that he can beat out Ben Jones. Johnson had some trouble last year with speed rushers, but regardless he would be talented enough to battle for position at left tackle at just about any school in the country. Getting to play Johnson at the right side is maybe Miami's biggest luxury outside of its enviable stable of running backs.

Of all the Northwestern recruits of the vaunted 2006 class, it's Jones that has had the quietest career at UM. Where as even non-contributors like Tommy Streeter and Kendal Thompkins seemed to be constantly impressing in practice, there was nary a peep made about Jones in the Randy Shannon era, and that's despite coming into Miami as a four star recruit. As a tackle, Jones is undersized, noticeably so when standing next to behemoths like Seantrel Henderson and Jermaine Johnson, yet despite that he's listed alongside Johnson as the starting RT on the current two deep. Conventional wisdom would be that this is one of Golden's more obvious depth chart ploys, though time will tell if Jones is given the opportunity to bring his career at UM back from the dead.

Gadbois was one of the first commitments under Al Golden, and indications are that he might be a hidden gem. Gabois wasn't pursued by the top of the SEC, but towards the end of his recruitment he was reportedly being hotly chased by the University of Georgia. Gadbois is a bit on the small side at the moment and will undoubtedly redshirt this season, but in two or three years we might look back on him as one of the big coups of Golden's slightly unheralded recruiting class.