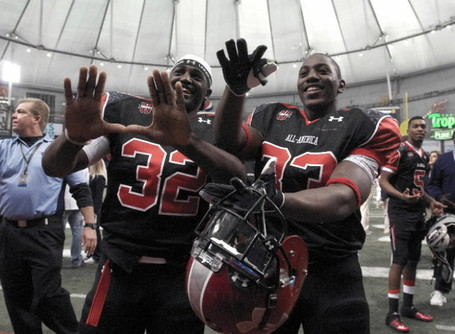 After months of speculation, Miami RB Storm Johnson has finally pulled the trigger: head coach Al Golden announced tonight that Johnson has decided to leave the team. Johnson was rumored to be one of six players suspended for Miami's opening game at Maryland, likely because he was allegedly part of an incident involving marijuana in the UM dorms (along with fellow transfers-to be Travis Williams and Devont'a Davis, and others). Says Johnson's oft-quoted father of his son's decision:

"He wanted to be closer to home. He's a mama's boy and the backfield is crowded," Johnson Sr. said. "Life is full of surprises. We're not broken up. It's his life. It's his life, sometimes you have to make hard decisions.

The departure of Johnson leaves Miami in a bit of a bind at running back. Mike James and Lamar Miller should split about 35 carries a game, provided that either is healthy. But running back rotations can often turn into infirmaries, and if either (or both) goes down, UM will be forced to turn to some unproven sources. Darion Hall may one day be a viable option at RB, but in spring scrimmages he looked at least a year away from a physical standpoint. Maurice Hagens— a converted fullback— is intriguing, as he offers something different with his size while maintaining surprising agility, but he's a square peg in Jedd Fisch's offense. Golden may also consider moving converted DB Eduardo Clements back to RB, though that would only exacerbate depth issues in the defensive backfield.

Johnson's transfer will also severely limit the impact that Randy Shannon's final recruiting class will have at UM. Of that much maligned class, three of the highest rated players (Johnson, Williams and Kevin Nelson) have chosen to leave the program, two others were nudged out by the new staff (Davis and Andrew Tallman) and one (Jeffery Brown) was kicked off of the team after being charged with rape. IN ASANTE JABARI-CLEVELAND WE TRUST.

UPDATE: I was a little vague on the details regarding the weed incident mentioned in this post, so I'd just like to point out that the incident I mentioned is the same one referred to in the Miami Herald story as such (this quote is actually from Manny Navarro's blog post on the transfer— for some reason the Herald hasn't put their in-print story online):

Johnson (6-0, 216) also was reportedly involved in an April 27 incident at a UM residential hall for which school police were called to the scene.

The Herald obviously does not mention the nature of the incident here, but it's an open secret around UM that it involved marijuana. When Travis Williams decided to transfer, he said that he had wrongly been accused by the new coaching staff of being a "marijuana user," and he is, at the very least, referring to that incident as well.