The punishments that Miami is facing based on Nevin Shapiro's allegations are months, if not years, down the road. That said, 12 current players are named in Yahoo's story, and most of them are vital to Miami's success in 2011. As I've already noted, the allegations against the Canes players currently on the team are on the mild side of what is included in the totality of the investigation. But, they're also not nothing. Most of the allegations involve shady visits to Shapiro's Biscayne Bay mansion, pool games with cash prizes, and various dinners and parties at clubs while said players were on UM's roster. Using recent precedent— most notably the Ohio State scandal, as well as the A.J. Green incident— I think it's reasonable to assume that the players will be suspended for about half the season. It should be noted that a few players (most notably Ray Ray Armstrong) are implicated with Shapiro during their recruitment, which could bring on harsher penalties for them. What might the Canes starting line up look like minus those players? Well, it wouldn't be pretty, for one. But, let's take a look anyway, shall we? 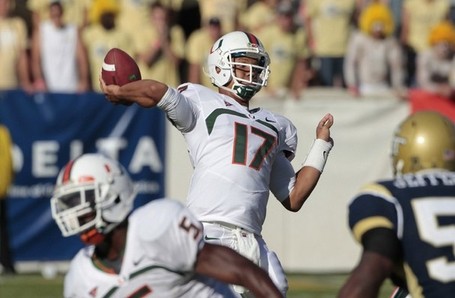 The supposedly heated quarterback race is effectively over. Morris takes the reigns, which might not be the worst thing in the world, but it leaves Miami one injury away from the return of the Spencer Whipple era.

Maybe the one saving grace in this report is that Miami's potential superstar is not implicated. A small victory, but one nonetheless. The onus on Miller to carry the team to anything resembling success becomes exponentially greater.

If Benjamin is suspended, Byrd takes over as the clear number one option. After him, the options for the second receiver slot are extremely murky. Tommy Streeter has been impressing in practice recently, but it remains unknown if he's ready to step into a starting role. If Aldarius Johnson is also suspended, that then leaves UM with a whole host of unproven talent, most notably Phillip Dorsett, Allen Hurns and Kendal Thompkins. Not pretty, so Streeter gets the nod.

Miami's tight end situation remains untouched. Ayles is likely entrenched, the second spot may be up for grabs.

The offensive line also remains intact. The projection of Johnson as well as both guards is a bit of speculation, but I think it's what we'll be seeing in College Park. This line now truly becomes Miami's backbone, and it will be crucial for them to help the team establish a running game that takes the pressure off of its depleted passing game. 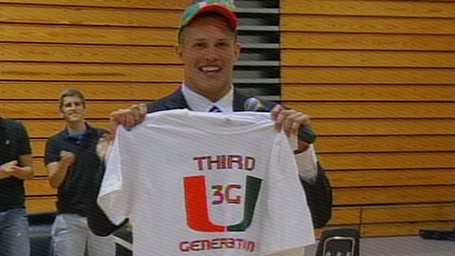 With the subtractions of Ojomo, Forston, Robinson and Vernon, Miami's defensive line is absolutely decimated. The defensive end position is a complete mystery, and becomes in serious danger of being almost nonexistent. The leading returning veteran would be Andrew Smith, but I don't think that the current staff sees him as an every down end. That leaves Pierre, who has long been a favorite of the staff, and Chickilo, Miami's top incoming recruit. Losing Forston would be a massive blow, and I think the run-stuffing Smith steps in front of Curtis Porter, who is reportedly injured anyway.

Losing Spence throws the already tenuous linebacker situation in flux. Buchanan remains on the outside, and I think initially the team would move current starting MLB Gaines outside and insert Futch, a senior, into the middle. I wouldn't be surprised if at any point, including to start the season, Gaines moves back to the middle and Spence's spot is filled by a rotation of incoming freshmen: Eddie Johnson, Gionni Paul and Denzel Perryman.

Losing Nicolas opens up the corner spot that he had all but locked down. Everything aside from that was fluid, but I'd expect Miami to opt for experience in McGee and Williams, the Wake Forest transfer. There will also be a heavy dosage of Thomas Finnie, and it would not be a surprise to see him take the spot opposite McGee. Lee Chambers and Dallas Crawford would also likely be in the mix.

With the loss of both Armstrong and Telemaque, Miami might be the first team to ever contemplate not playing any safeties. Right now, Highsmith is listed as a back up alongside Andrew Swasey, the walk-on son of strength coach Andreu Swasey. It's quite possible that the coaching staff would give Swasey the nod, but I'm willing to bet that they'd be unwilling to take that leap. In my estimation, that leaves a few players that were recently moved off of the position: Rodgers and Eduardo Clements. Considering that Armstrong and Telemaque are thought to be the best safety tandem in the conference, it makes sense that the more talented back ups would be moved to positions of greater need, but that would need to be reversed now. In my estimation, Rodgers would get the nod over Clements, mainly because he worked at the position last season.

All in all, this is looks exceedingly grim. Time to drink up.