Share All sharing options for: Seantrel Henderson Out Indefinitely b/w Crying Yourself to Sleep at Night 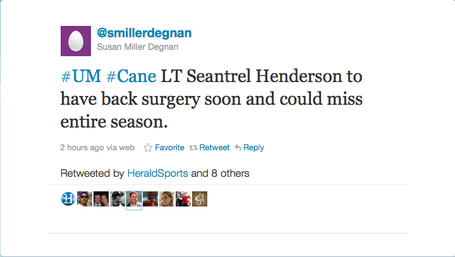 So, the big news out of Coral Gables today is that Seantrel Henderson— man of the people, prince of our hearts— is having back surgery and will be shelved indefinitely, if not for the whole season. Now, theoretically, this shouldn't be a crippling problem. If there was any place where UM might've felt comfortable in its depth, it's at offensive line. In fact, Henderson wasn't even the first string left tackle exiting the spring, or so we were told. He was behind newcomer Malcome Bunche, with Jermaine Johnson and Ben Jones penciled in on the right side. If all of this were true, then why is All-ACC offensive guard Brandon Washington being moved to right tackle?

Moving guards off to tackle was a staple of the Randy Shannon era. It was never really a good move. In 2009, Matt Pipho was largely a disaster at right tackle. Last year, the Canes tried it with both Joel Figueroa and Orlando Franklin; Figueroa was clearly overmatched prior to his injury and Franklin was serviceable but also very clearly out of position. Brandon Washington is talented and reliable, but not moreso than Orlando Franklin, a second round pick who was still not good enough to be an impact, every down tackle. Washington is big, strong and mobile for his size, but it takes a special type of athleticism to play tackle. It looked as if Miami was in line to have two of the best bookends in the ACC in the young Henderson and Johnson, along with envious depth behind them. But, that assumption looks foolish now, and Henderson's injury has revealed that. Maybe Johnson has been supplanted by Washington, or maybe he's been moved to the left side in front of Bunche. Either way, Miami's offensive line depth may not be what we thought it was.