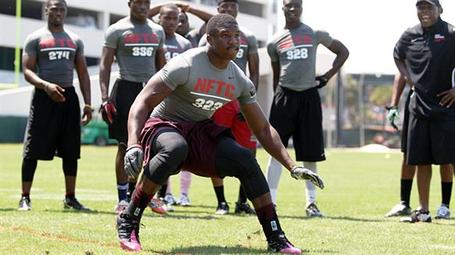 We knew that at some point this was coming. Miami losing a recruit (if not multiple) due to the looming spectre of massive NCAA penalties was all but an inevitability. And it seems as if the other free shoe has finally dropped. According to Canesport (and via Bruce Feldman), Norland LB Keith Brown -- one of Miami's first and best recruits for the 2012 class -- is all but gone:

One of Miami's top commits, [Brown] visited Clemson over the weekend and "loved" it and told CaneSport that while he would still consider himself a very soft Hurricane commitment, he also says "most likely I won't be going to Miami."

On the one hand, this type of thing happens all the time in modern college football, scandal or not. Brown, according to Canesport, committed to Miami on September 13 of last year. For many adults, let alone 17-year-olds, a lot of things can change in a year's time -- just ask Patrick Johnson Petersen or Bryce Brown. But, (Keith) Brown directly chalked up his impending decommitment to not just the Nevin Shaprio scandal, but the fact that Miami's exact penalties are currently unknwon, and will be unknown for quite a long time.

As Feldman points out, there's no way that Miami will know it's ultimate fate by Signing Day 2011, and that uncertainy is going to be a huge hurdle in recruiting. Here is Brown in his own words:

Because Brown wants to know what NCAA sanctions UM faces before he graduates in December. He doesn't want to wind up on campus in January and find out about any punishment afterward. What would it take from the NCAA to keep him on board with Miami? "Probably no bowl games and no TV time and taking scholarships away," Brown said. "One year is no problem. Probably two or three (would cause him to go elsewhere)."

And that's the crux of it. The loss of Brown is especially painful for three reasons. For one, you never want to lose one of your absolute best recruits, both from a morality and talent standpoint. Secondly, the Canes are thin at linebacker, especially up the middle, and will be losing starting seniors Sean Spence and Ramon Buchanan after this season. Lastly, even though Brown won't end up at Miami, we will probably still see a lot of him. As Feldman mentioned, Brown visited Clemson this weekend, and "loved" it. And, according to Rivals, he's set to visit Tallahassee the weekend of October 21st, when the Noles host Maryland.

But, it's not unfathomable that Miami could relatively weather the storm on the recruiting front. Lane Kiffin has been able to recruit pretty well at USC since he arrived on campus amidst a hail of NCAA penalties. And the Canes are still able to fall back on the fact that the university sits smack in the middle of arguably the most fertile recruiting radius in the entire country. Sure, they may miss out on the most touted prospects in Dade and Broward and Palm Beach, let alone anything north of that. But the depth in South Florida -- both in terms of the sheer number of FBS prospects and in where they play on the field -- gives UM a better opportunity than most to make due with less scholarships. It won't be easy, obviously, and both the school and fans alike will likely have to deal with dissapointing recruiting rankings for the forseesable future. But the program was rebuilt thanks to some nobody out in the woods in Immokalee and some midget walk-on receiver from Carol City and some other kid from Gainesville who everyone wanted to play safety. The diamonds in the rough are out there. But they need to be found, and coached.