Highlights of the peaks, valleys, jokes, and tears of Cane fans while defeating the NC State Wolfpack. With bombs.

I was outside my grandparent's house on Old Cutler and a man in a UM polo shirt is walking his dog. I thought, "This man is dedicated to the Canes. I prefer a jersey to a polo when watching at home, but no matter polo tucked into pants man, go Canes." We got to talking and he was actually going to the game. It was 11:55 am. For a noon kickoff.

Anyway, we had another record setting thread, with 875 comments. You guys are the best. Without further ado, here are the notable combinations of wit, snark, knowledge, and spelling errors.

As always, we start off with best celebration of the night. I’m handing the honors to guest judge Josh Kaufman, who just about lost it after Dorsett’s 100th big catch in the game and ItsScottieTime’s response

Scottie wasn't the only one with Mr. Dorsett on the mind.

Have we learned nothing from the K-State mask? You can give anyone a middle name.

You guys were also in a contemplative mood. Must have been the full moon Saturday night.

More things I ponder at night

I’m sure Sports Info is all over this 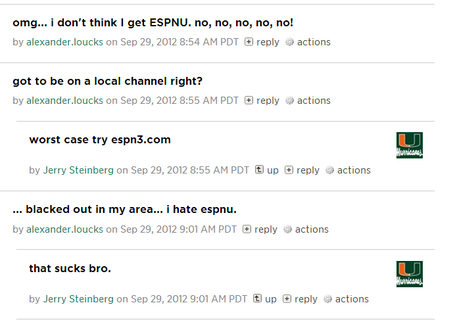 That does suck, bro. But something tells me this story isn’t over yet

On the flip side, The Mike James Award For Continuous Sunny Optimism Went To MikefromVA.

Always look on the bright side of life

Runner up was Alex

But if you're looking for someone to blame for Tio's heart attack, also blame Mike

The Least Prescient Call of the Night went to Jerry

Amerson got burnt for all 5 touchdown passes. Sorry Jerry.

Though the Miss Cleo Award for foresight goes to Hoyadestroya85. With the Pack driving to win the game he wrote

Literally one minute and one Thomas Finne pick later

Glennons are gifts from the ACC gods

Best Walt Disney Reference Of The Game (and likely the season, because you guys don't strike me as the Little Mermaid types)

Pretty obscure. If you aren't up on your cross-dressing Disney cartoons, here it is.

Vote for your favorite in the comments

The Smartest Guy In The Comments Thread Was Big Spoon

Yes, I will give you awards for agreeing with me. You know what they say, great minds think alike.

Back to the developing Alex story

Finally, the moment you have all been waiting for. The best use of GIFs goes to Big Spoon for dropping Mario bombs as good as the PHD-SM bomb that won the game

Big Spoon, Alex, Scottie, and MikefromVA are killing it after week 2 of game thread highlights. Let's see some new guys step up in Notre Dame game thread so these 4 don't have to wallpaper their rooms with 7F certificates of achievement.