Our merry band of commenters have grown into a strong, united team, but a disagreement over Pizza Rolls threatens to tear them apart

We started off down a man with our resident GIF expert Big Spoon stuck at work. The rest of you rallied for a workman like 659 postgame thread. I saw a lot more effort than last week against ND. Guys were trying to be funny, the tempo was better, we don't have to send a search party. Here is your weekly funny to tide you over until Saturday.

Since we actually scored a touchdown this game, we are reinstating Best Celebration.

We were a little rusty. 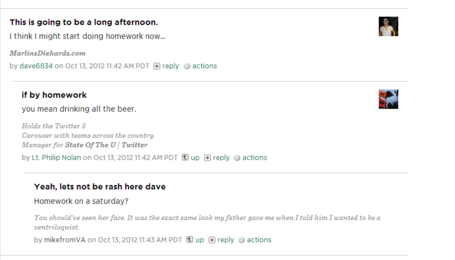 Seriously, on a Saturday?

Apparently you guys don't think as highly of Scottie

I told you last week Scottie, these people aren't your friends.

For this, LT. Cruz is also walking away with Rookie Poster of the Night

Trivia time. Which of the following is grammatically correct?

This needs to change

Sign our petition to make this happen! Winning games and changing lives since 1925

I've read well over 3,000 comments this year. But this is the first one that has me completely stumped. Alex please tell us what you were talking about when you brought up Optimus Prime

On second thought, I don't even want to know

The guy with the most to lose on Saturday wasn't the formerly first place in the Coastal Division Miami Hurricanes, but rather Damion

I learned a long time ago not to wager on the Canes. Now you have the bitter taste of defeat AND you're in a dress

Lt. Cruz had the right mindset. Its all about the U game thread comment highlights

We're starting a new award retroactive to last week. Most Obscure Movie Reference goes to Alex, once again. Last week it was a little known Mulan reference, this week its 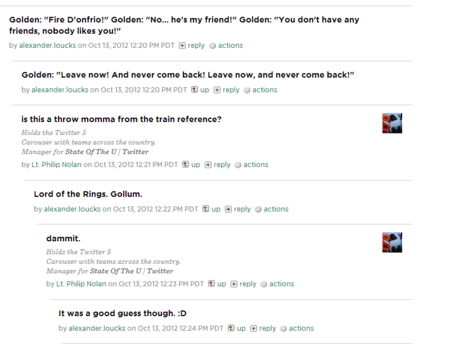 And yes, you managed to make a more obscure reference to a billion dollar grossing trilogy than this reference to a crappy Keanu Reeves movie one step above straight to VHS

For some reason when this or the Water Boy is on, I can't change the channel. Gene Hackman is so inspiring

Mike James Award For Continuous Sunny Optimism goes to Dorseyitis. After a back breaking, Megatron-esque, circ de soleil inspired catch by South Florida's own Gio Bernard on 4th down that led to the definitive score, we have 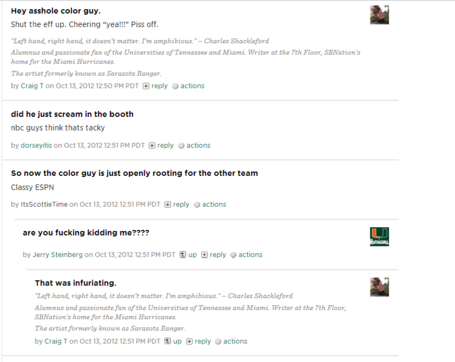 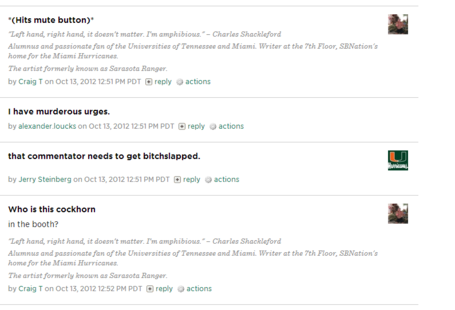 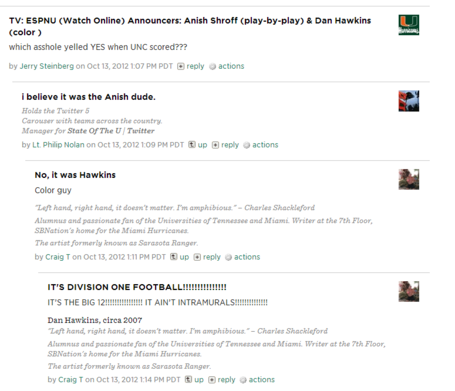 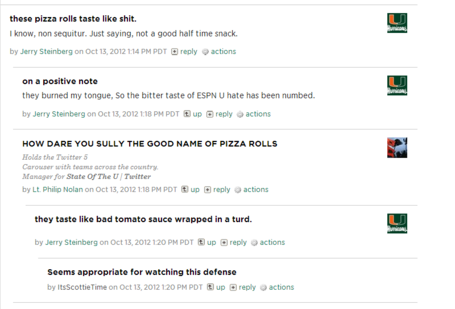 The Least Prescient Call of the Game went to Dorseyitis

We only gave up 3 2nd half points. Progress!

I do my best to avoid giving props to the staff here at State of the U, but this had me rolling. This comment brought to you by the Kirby Freeman fan club

And GIF of the Game went to Scottie, not because he blew us away, but rather he was the only one post a GIF out of all 600+ comments. Though it was pretty good.

For those of you who don't know how to post a GIF, here is a quick tutorial from our own Big Spoon

And now you have no excuse. Next week, I expect to have a lot of wide left, wide right, and Sean Taylor in the rain GIFs. And bonus points for any reference to Chris Rix.