I apologize for dredging up the past, but neither blowout nor injury will keep your blogger from his appointed rounds. There was nothing funny about Saturday's game, but while PHD didn't bring his A game, you guys certainly did. For a half. Kind of like the Canes. We had over 450 comments by halftime and were headed for a new record until a few long runs and dropped passes made everyone drink more and type less. I hope this warms your soul, or at least rinses some of the taste of defeat from your mouth before we get UNC this week.

We're going to suspend best celebration this week due to a lack of morale because with only 3 points, there wasn't much to celebrate.

But the commenters injury report is out of this world. In lieu of awards, I think we need a search party.

You don't want to see Alex angry. He could be anywhere by now. Climbing buildings, felling trees, attacking helicopters.

At least Hulk smash remote is easier to replace than hulk smash television. He also might need some new clothes.

These people aren't your friends

As long as the weird place isn't in a pool of ice with a incision where his kidney use to be, than Scottie should be ok

Be on the lookout for reports of naked cannibalism

It's never a good time to try bath salts

I tried to find a best complaint about a ref, but there were too many nominees. Here is a sampling 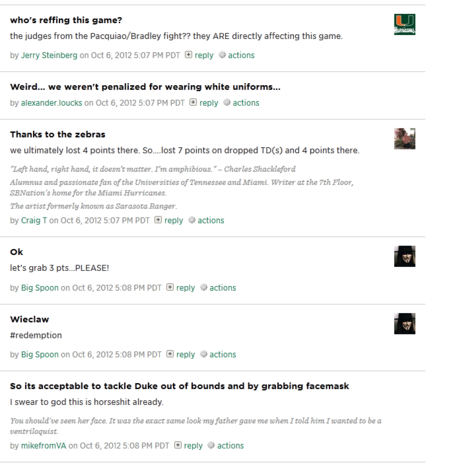 But seriously, running into the kicker was complete bunk

And those helmets were ugly as sin

And nothing brings Miami fans together more than biased, smug NBC announcers

Freshman Commenter of the Week went to Dorseyitis for this

It's good to see the new guys step up and grow, even in a blow out. Dorsey got some important burn that will allow him to grow as a commenter, especially next season after another year of UTough

Lucky for you guys, GIFs can be used both in victory and defeat. The Best Use of GIFs Award went to Scottie for pretty much nailing how I felt after this one