How do you differentiate between Duke (Johnson) and Duke (University)?

So I woke up Saturday morning, put on the orange and green, and was ready to watch the Coastal Champion Miami Hurricanes extract some revenge against their instate rivals. Then, to my dismay, I turned on the TV and saw a barely bowl eligible Georgia Tech team, last seem getting their hearts ripped out by our killer teddy bear, Mike James. I do a little googling and found there is some doofus named Ned Sharpei that bought some meals and drinks for very mediocre players under the Coker and Shannon regimes. You guys hear about this? I think someone should look into this.

So instead of weeping over our lost ACC title (c'mon, FSU barely beat Georgia Tech) I put my energy into reliving the Duke (Johnson) crushes Duke (University) shoot out in Durham, NC. And here we go.

At least our guys aren't huddled near a heater

Least prescient call of the night

Don't ever listen to Alex. We gave up 45, like we have all year

We managed to fix the Duke-Duke confusion 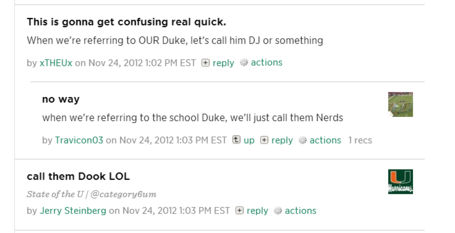 While I don't condone misspelling, Nerds is appropriate

Duke has an attendance problem of their own

Though in their defense, most of the kids were out of town for Thanksgiving. 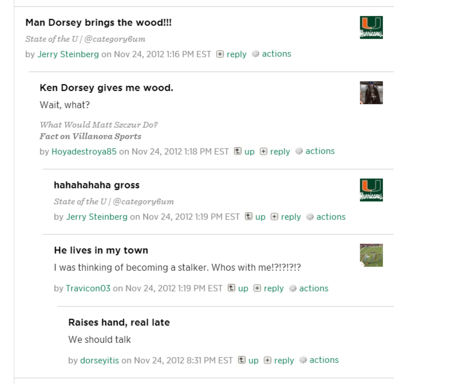 Who doesn't swoon over quickly released, wobbly passes that get to their intended target without getting picked off? I'm a simple man

Are they talking about our Kyle Wright? 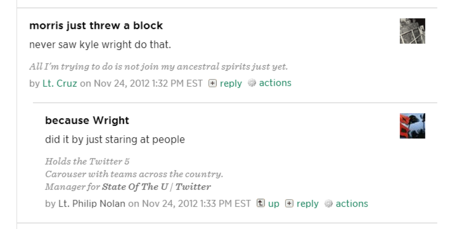 He threw laser guided missiles directly into the opponents hands. And thus the Kirby Freeman Fan Club was born

That's how you do it, Alex

Scottie, yet again is the saddest guy around 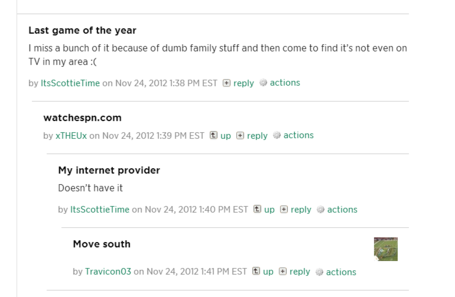 But Travis will fix everything 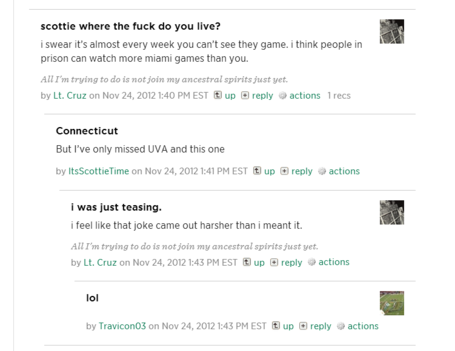 Scottie definitely is winning saddest guy of the year

Best summary of the season

And what isn't a game thread without picking on the announcers 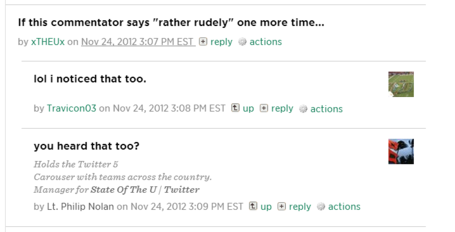 Caneman Carman was watching his first football game ever.

That's how bad the officials are. You should of seen us describing overtime to him

And last but not least, best Gif of the game

And so ends a great season with a lot of hope for next season. I'd like to think game thread comments had a great, if not entirely regular, run. I'll be back in the next few weeks with some end of the season awards for our most proficient posters. And seriously, someone should check our Ned Sharpei.