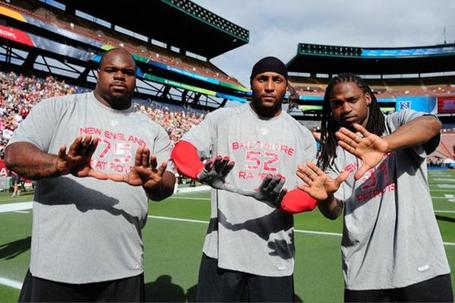 Though it seems like half of the prospects for 2013 have already committed, the Miami Hurricanes have been pretty quiet on that front since January 15, when Al Golden received three of his five commitments. Well, that changed today when Ray Lewis III -- yes, that Ray Lewis -- gave Golden his verbal commitment in Coral Gables. Lewis III is unrated by the major recruiting services, though I expect he'll eventually be tagged as a three-star, and it appears as if Miami was his only offer to date. He plays running back and cornerback in high school, but will likely come in listed as an athlete, though he doesn't have exceptional speed and at 5' 10" and 190 pounds (which is probably generous, looking at some photos) his size isn't great. In short, he's likely a borderline prospect for a top-flight national program, but as it pertains to Lewis III, none of that matters.

He is, if you're Golden, a prospect that you have to take.

It may reek of nepotism, but Ray Lewis III's lineage matters, and it matters more than A.J. Highsmith's lineage or James Burgess Jr.'s lineage, and not because Ray Lewis is one of the most famous alumni in school history. No college football team's brand (and it seems like nothing is more important to kids right now than the word "brand") is closer tied to the NFL than Miami's, and I'd wager to say that it's not even really close. Canes coaches can't sell atmosphere or conference or facilities or, at least recently, winning, but what it can sell is the NFL, and even more importantly it can sell a unique relationship between its ex-players and its current ones [enter Nevin Shapiro stripper party joke here]. Canes turned NFL stars being around the team is one of the most important aspects of the program, and when it comes to Al Golden specifically, it seems as if no one pro has been more important to him than Ray Lewis.

Lewis' name was the first pro out of Golden's mouth in his introductory press conference, and Lewis, along with Ed Reed, was on the Miami sideline for Golden's first ever game as coach. This past January, Lewis -- clad in one of the "THE U INVENTED SWAGGER" shirts that have become so popular around Coral Gables -- addressed the current team, and he's visited campus a few times this winter. Lewis almost certainly is not asking for anything in return -- even implicitly -- for being visible and interacting with the team, one that is young and presumably very impressionable. But just because no favor is asked for doesn't mean that no favor should be given, and here is precisely why:

"U Family" can't be an empty slogan, and Ray Lewis has made it very clear that he's family.