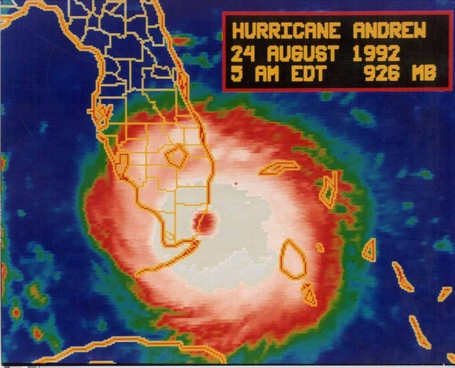 The college football off-season is notorious for its lack of brevity. The longest break of any major sport, when June rolls along and we're still months away from the first kickoff. As such, we will continue this multi-part series on great past Miami Hurricane teams.

We all know of the illustrious history of the 5 national title winning teams. What many outside the super fandom do not know is how many times Miami was in the title game on the losing side. This fact is what separates Miami from any other program of the last 30 years. Today’s focus: the 1992 Sugar Bowl losing edition.

Easily forgotten in this 1992 Miami edition was Hurricane Andrew. While Miami was planning a defense of their split title with Washington, the worst hurricane since the 1925 program namesake displaced thousands of South Floridians, and the football team was no exception.

Jermaine Chambers, a University of Miami freshman wide receiver, felt particularly lucky today as he bounded off one of three buses carrying Hurricane players to their emergency practice site here at Dodgertown.

"We stayed on the second floor in the bathroom. I kept thinking that this was it. My life was over. I said, ‘When is it going to stop?’ But the wind just kept coming."

Still scheduling a fantastic out of conference schedule (the newly formed Big East was only 4 conference games), Miami opened this season against a upper middle tier Big Ten team in Iowa. Up until the 2006 game against #1 ranked OSU, this was the last time Iowa played a true night game at Kinnick Stadium. Respect! Iowa, however, would not grant the same respect for Miami’s schedule strength, finishing 5-7. Torretta completed 31 passes for 433 yards and two TDs, a nice first outing to a fantastic year.

It sure gets hard researching a non-title winning team in the early 90’s playing a lack luster directional Florida team. What does this mean? I don’t have any stats, only the above link. Lets all assume Gino threw a pair of TDs, more than 300 yards, and this one was over before halftime.

One year away from the Wildcats demolishing shutout of the Canes in the Fiesta Bowl, Arizona nearly pulled one off on the road, prematurely breaking the eventual 58-game home winning streak. Arizona kicker Steve McLaughlin barely missed a 51 yard field goal as time expired. Way too close for a defending champ playing a craptastic Pac 10 team. Alas. Another victory! 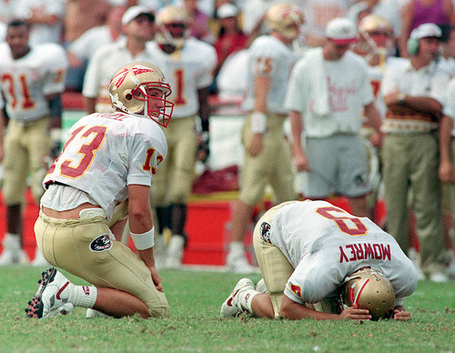 Wide Right II. The game that created the stigma Bobby Bowden will never remove, with our hindsight knowledge of the past 20 years. Miami won for the seventh time in eight meetings, as Dan Mowrey missed a 39-yard field goal on the final play. Not as dramatic as 1991, when Miami clung to a one point lead on the road. This FSU team was ranked #3, and would propel Miami to its Sugar Bowl run with the needed media respect. FSU was ahead 16-10 with a little over nine minutes remaining. One Torretta to Thomas 33 yard TD and one FSU muffed punt for a safety later, and it’s 1991 all over again. Florida State and Charlie Ward headed on back to Deliverance, FL squealing like pigs. Weeeee! Weeeeee! FSU wouldn’t lose again either and finish the year ranked #2.

A hilarious anecdote from current UM coach Michael Barrow on his viscous hit of Tamarick Vanover in the ‘92 game:

"They did that play earlier in the game, I went to go get him and the umpire got in my way and I was like, ‘Awwwwww,"’ Barrow said. "I remembered Vanover from when he visited Miami and I went up to him and said something like, ‘Man, you chump, I’m glad you went to that girls’ school, because you weren’t tough enough to come here."’ And a couple plays later, I got the hit."

Lets rub it in some more.

What a schedule! Florida State and Penn State, back to back, in the age of conference play? Astounding. This of course was the last year PSU would be independent, so a game this late in the year was still available. Torretta had a horrible day, going 11 of 31 for 80 yards, the lowest total since 1982. That passer? Mark Richt. Guess he calls the plays better than he runs them.

Michael Barrow stuffed a 4th and 1 on Miami’s 5 yard line with nine minutes left to preserve the 17-7 lead. Penn State would score at the six minute mark to close the gap to three, but wouldn’t get a first down the rest of the way. A little known fact about this game? The players decided against wearing camouflage into Happy Valley as a tribute to the late Jerome Brown, one of the leaders of the 1986 Fiesta Bowl losers.

TCU was 2-8-1 this year, certainly not their 1950s and 60s or even current heyday. The demise of the Southwest Conference really hurt TCU’s national clout, not to mention my permanent soapbox on the Cotton Bowl’s diminishing notoriety. Miami was a 38 point favorite, as Torretta threw for 350 yards and 3 TDs.

The first game of the abbreviated Big East season, and Miami did what was expected after running the mini-gauntlet of their off season schedule. 17-0 lead after the first quarter, 31-3 at halftime, the final score was not indicative of this blowout. If only the Hokies sucked this much today. They didn’t get a first down until late in the second quarter and didn’t score a touchdown until Miami’s third string was playing in the fourth.

Torretta also became first on Miami’s career completions list, going 17 of 28 for 343 yards. At the time he held the record for completions, attempts, passing yardage and total offense.

Miami rolled to 2-0 in conference play, as Miami again shut out a conference opponent until the scrubs were inserted in the fourth quarter. This was the 50th straight win at the Orange Bowl, and their 26th overall. Torretta had five TD passes, and with Heisman frontrunner Marshall Faulk of San Diego State injured, this was probably where Gino started gaining steam. Funny how if Faulk doesn’t get hurt, he probably wins the award and Torretta is saved from a lifetime of heckling.

Little remembered fact was the NY Times used to keep computer rankings for college football, and they were used as one of the primary sources for poll-nicks to base their votes on. As much as the BCS sucks now, it sure is better than hoping your team gets the bid to a marquee bowl game and plays a quality enough opponent to garner enough first place votes come January 2nd. And what a concept! All bowl games done on New Years Day! Miami rolls against Temple, 3-0 in the Big East.

Hot damn! Now here was a top notch Syracuse team! Came into the game at 9-1, already won the Lambert Trophy (what the eff is that?), had pretty much clinched a Fiesta Bowl bid, and had dreams of securing an Orange Bowl bid for their own backdoor shot at the national title. Two good previews of the game, here and here, show this contest had a good quality of build up attached.

The game lived up to its hype, with the Canes escaping with a victory. After a last gasp catch by ‘Cuse TE Chris Gedney, he was tackled at the three yard line after time expired. Syracuse QB Marvin Graves actually threw up on the field on the final drive, forcing the use of a time out.

"I felt a sharp pain in my heart," Graves said. "I don’t know what happened."

"We’re just looking into their huddle and he’s throwing up in the open," said Warren Sapp, a freshman Miami defensive tackle. "It was like, ‘Yeah, we got him.’ "

Syracuse would finish the year 10-2 and ranked #6 after beating Colorado in the Fiesta Bowl. They only lost to Miami and Ohio State. Fantastic year indeed. Miami went undefeated in conference for the second year in a row, with a whopping 6-0 overall two season record.

Thanksgiving weekend in San Diego? Not a bad way to spend the holiday. This was a unique game, as a team of Miami’s caliber would never play a SDSU on the road today, especially this late in the year. With Marshall Faulk still injured, the Heisman showdown between Torretta and Faulk never came to fruition.

Miami finished their second straight undefeated regular season, and fourth in seven seasons. Crazy. Now that is a record I don’t think will ever be matched. A death threat was called in for coach Dennis Erickson in the second half.

"I noticed all the coaches got away from me pretty fast," he (Erickson) said with a thin smile.

Faulk really should have won the Heisman this year, and the fact these top two hopefuls actually played such a lopsided game during the regular season, with Faulk injured, probably secured Torretta as the winner.

The 1993 Sugar Bowl is the first recollection I have of football. I didn’t watch one second of this game, but I recall seeing the score as a youngin’, and wondering how the #1 team lost by so much to the #2. All my fat, mouth breathing, Michigan fan uncles were also very happy with the result. I don’t think it is going out too far on the limb to say this is the crest of the national Miami hatred. Sure, 1986 was what established Thug U, but the 1991 Cotton Bowl was what legitimized it. The 15 yard unsportsmanlike penalty? You can thank Miami’s 46-3 drubbing of media darling Texas. Well, that and the 16 penalties for 202 yards.

Four national titles in nine years (’83,’87,’89,’91), one national title loss (’86), and two other top five finishes (#2 in ‘88, #3 in ‘90). Yeah, I think I would hate these guys as well. Think Urban Meyer’s Florida teams, but for another half dozen years, always in the title hunt, even after Heisman graduations and multiple recruiting class reloads. Add in a healthy dose of good ole fashioned Midwestern racism, and we have some spot on winners for Miami haters on that late afternoon in the Michigan winter, on the first day of 1993.

Alabama ran the ball 94% of the time, and their QB Jay Barker was 4 of 13 for 18 yards and two picks. What!? Miami couldn’t adjust their defensive game plan? Ugh. And just like in the 1987 desert, a Heisman winner threw multiple picks (three in this case) that all led to touchdowns for Alabama.

If you think about it, this season, coupled with the 1991 split title, was eerily similar to the 2001-02 seasons. Went undefeated the first year, and was favored the following year to repeat. Ran through the regular season undefeated, but with obvious hiccups (WVU running all over them in ‘02, only beating UA by 1 at home in ‘92), only to lose the title game as a heavy favorite. Should this team have not bent over backwards for a lesser talented, way lesser coached SEC squad (Gene Stallings was actually interviewing at Navy!!), Miami would have had the highly coveted back to back titles they have still been unable to attain.