The Miami Hurricanes have been in the red zone 16 times so far in 2012, but have only scored a touchdown eight times. What's been the problem, and what can Miami do to fix this?

Share All sharing options for: Can Miami's Red Zone Woes Be Fixed?

The Miami Hurricanes have entered the red zone 16 times in four games. If you're wondering, that's not too bad. That average of four times per game would put them in the middle of the pack nationally. They've scored 14 of those 16 times -- that 87% score rate is currently the 42nd best rate in the country. That, though, is the decent news.

The bad news is that of those 14 scores, only eight have been touchdowns. That's a touchdown rate of 50%, tied for No. 88 in the country. Some teams can survive red zone issues like this -- Miami is tied with Notre Dame and ahead of Stanford, for instance. But those two teams also have a few of the best defenses in the country, and we all know that Miami is far from that. The Canes cannot afford to leave touchdowns on the board this year, and upping their touchdown rate will go a long way to determining whether or not this team can surpass six wins, a number that they've put themselves in the position of reaching.

There are in my mind, two issues here. One is Stephen Morris' accuracy. This is a general issue, but it gets magnified in the end zone. Against Bethune-Cookman, Morris rolled to his left and overthrew a receiver with no defender within four yards. On Saturday against Georgia Tech, on the drive that resulted in Jake Wieclaw's missed field goal (which we will examine in-depth in a second), Morris overthrew an open Rashawn Scott on a slant in the back of the end zone. Miami absolutely has to have these points.

But, Miami can also improve their playcalling in the red zone. Against Tech, they leaned more on Mike James, which resulted in four total touchdowns for the running back. But on that aforementioned missed field goal drive, the Yellow Jackets flat out handed Miami a touchdown on two plays. Unfortunately, the team was not prepared to take advantage of the gift. On two straight plays, Miami lined up with three wide receivers to Morris' left. Here is what those back-to-back formations looked like before the snap. 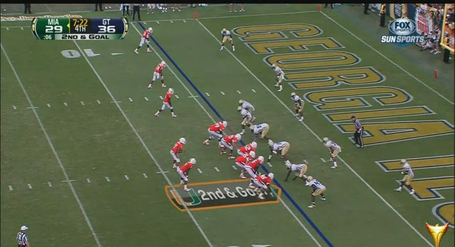 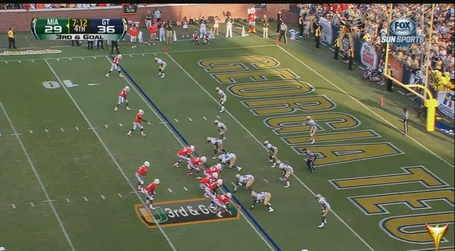 On both plays Tech has nine defenders in the box, loading up to stop Miami's running game. This means that there's only two defenders covering Miami's three receivers prior to the snap, though the third cornerback and back safety are close enough to the inside receiver (Phillip Dorsett) to scramble back in event of a pass. But it shouldn't matter. This is an automatic touchdown -- twice -- if Stephen Morris quickly throws a bubble screen to Dorsett. This should be an automatic check when Miami is in this formation, regardless of where they are on the field. If a team is going to cover your three receivers with two players, you need to make them pay. This is a tenet of the "constraint theory" of offense as outlined in this Smart Football post.

How easy would a game-tying touchdown have been in this situation? Take a look: 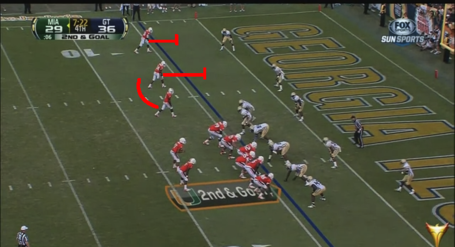 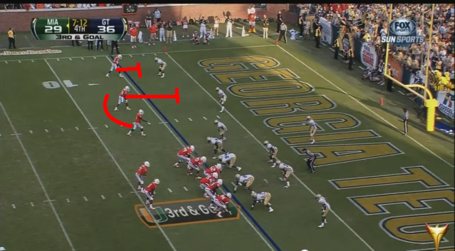 On either play, Dorsett could catch an easy swing pass and sprint to the pylon untouched. Miraculously, Miami was able to recover from these two missed opportunities. But they shouldn't try and make a habit of it.