Miami Hurricanes Scholarship Status: Where Does The Team Stand?

Figuring out scholarship numbers and fitting in a recruiting class can be a confusing exercise. Here's a look at where Miami currently stands.

Share All sharing options for: Miami Hurricanes Scholarship Status: Where Does The Team Stand?

The NCAA rules on how many scholarships can be offered, kids can be signed, and the overall team scholarship limit can be extremely confusing to the average fan. Especially when scholarship info for the team is not officially or readily available. Thankfully, a dedicated user over at CanesInsight by the name of OfaceKilla has put together a helpful info-graphic to lay out where Miami currently sits (or at least where they should be.) 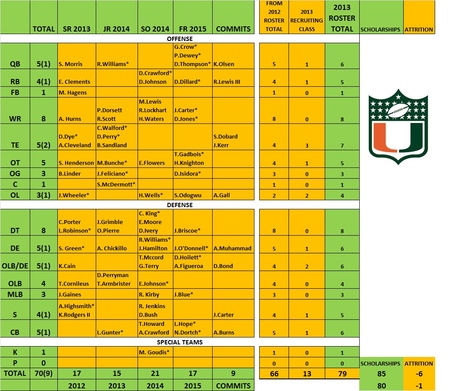 To help, I'm going to try and remind you all what the basic rules are as simple as I can. It all starts with the rule that teams are allowed a maximum of 85 scholarships per year. You can obviously have more players than that with walk-ons, etc. The size of the recruiting class that you can sign is determined by how many players you currently have on scholarship, which is then subtracted by that 85 number. For example:

This is where it can start to get a bit murky. The NCAA allows for 25 recruits per cycle, with a cushion of up to 28. Some conferences work by their own regulations. For example, the SEC strictly limits classes to 25 with no cushion. The ACC, however, follows the NCAA rules and does not set their own standards. The murkiness comes in when you start to factor in early enrolling and back counting. To help you through this, I'll try and go slow.

Schools can sign more than the 25 (or 28) kids provided that some of them are enrolling early, and the school back counts them to the previous year. This is only possible if the previous year's class is under that 25(28) limit. Let's look at Miami's case. In 2012, the class included 33 recruits, 7 of which enrolled early (counted towards 2011.) This brings that class down to 26.There were three players that signed LOI's but did not finish the year at Miami. AJL was academically ineligible, Vernon Davis transferred, and Josh Witt was forced to end his football career. Of these three, AJL would be the only one who would not count towards the 2012 class, which brings it down to 25. These three, however, will not count against the total 85 scholarship limit for this year.

Now, Miami has four confirmed recruits enrolling early for this year's class: Beau Sandland, Sonny Odogwu, Hunter Knighton, and Alex Figueroa. None of them will be able to count towards last year's class, however, since the number remained at 25.

The next issue affecting numbers is players that are released. We all are aware by now that both Thomas Finnie and Gionni Paul are no longer with the team. This helps with the overall 85 limit, since it helps increase Miami's recruiting budget for this season. So, based on the chart above and a bit of damn blogger stats, Miami stands at 66 current scholarships. Subtracted from 85, that leaves a maximum of 19 kids that can be signed this year. Of course, Miami could sign more than that if they expect any sort of attrition in the form of existing guys becoming ineligible or transferring, or signed recruits not making it into school to begin with.

The current class stands at 13, and all are expected to be eligible when school begins. That leaves 6 remaining spots to be filled between now and national signing day, which is February 6th. Be sure to check out our recruiting page to see who the remaining targets are!