As Hurricanes fans we've become accustomed to tossing out our favorite statistics. We do so because we want to convince ourselves that Miami's defense has drastically improved, because we want to provide naysayers with meaningful numbers to illustrate how Duke Johnson is simply better than you, and we do so this year in particular because, unlike past years, Miami Hurricanes statistics are actually worth bragging about.

Staring down the barrel of Florida State week, this week's StatMilk will be slightly different than the rest. And why is that? Because fellow Hurricanes fans, we are blessed with the presence of the chosen ones. The elite. The upper echelon of the Atlantic Coast Conference. Halfway through the season and we might as well hand them their championship rings. Jameis is to Lebron as Jimbo is to Lebron's mother. Apologies to Delonte West.

Of course, this ruffling of feathers is all in good fun, because who plays to win anymore, right?

FSU: THE BEST. A WORLD OF POTENTIAL. MOST SEXUALLY STIMULATING OFFENSE EVER. SOMEBODY GET BOBBY BOWDEN A CIALIS. JIMBO ALWAYS CALLED THE PLAYS, AND HIS WIFE SAID HE'S NOT CONTROLLING IN THE SLIGHTEST. 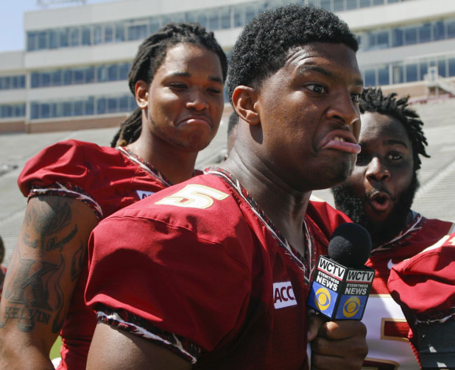 Years ago, one year ago, the University of Miami and the Florida State Seminoles squared off in Sun Life Stadium. The setting was a warm south Florida night accompanied by an Atlantic breeze that left the scent of salt wafting in the air. The time was 8:00-ish. Announcers Kirk Herbstreit and Brad Musburger held the mic. The feeling was electric, the play ferocious.

WE LOST?! IT DOESN'T MATTER THE GAME WENT INTO THE 4TH WITH MIAMI DOWN 16-13. THEY SCORED 17 POINTS IN THE 4TH QUARTER, IT SHOULD BE WORSE. WE ONLY MADE IT A 13 POINT GAME ON A GARBAGE TIME TOUCHDOWN. I WOKE UP IN A NEW BUGATTI. BOYS TELL STORIES ‘BOUT THE MEN. CLAPPERS TO THE FRONT...

Boston College? -- I DIDN'T GET A HARRUMPH OUTTA THIS GUY.

Dabo? Great game, Florida State. Best performance of the year against a once highly touted opponent.

While the numbers provide insight, the game itself will be a horse of a different color (unless you're an FSU fan). Saturday is approaching rapidly and it's almost time to batten down the hatches. Remember that stats are your friend (let's be honest, probably your only friend). We here at SOTU wish only the best to you and yours and we'll be waiting for you in the game thread, because we don't get to go home anymore.