Saturday was the worst day of the 2013 season. The lack of success I had picking games was overshadowed by the frustration and disappointment stemming from Miami's home loss to Virginia Tech. I'll share my thoughts on Saturday's game and how they mirror my day of disastrous picks. I offer my perspectives on coaching, the future of the program, and Canes fans. Remember where we have been and continue to support this team.

All week I had been talking about the importance of Miami starting fast on Saturday night. After a defensive stop to open the game, Miami got a huge play from WR Stacy Coley. The long touchdown got the crowd going and the Canes led 7-0. After another stop on defense by Miami, Coley went back to field the Virginia Tech punt. It was all downhill from there. Miami had back to back fumbles on special teams that completely changed the complexion of the game. Virginia Tech took a 21-7 lead and never looked back. It just wasn't Miami's night. After all of the bounces that had gone the Canes' way earlier in the season, the good fortune simply ran out. The two teams combined for five fumbles and Virginia Tech recovered all of them, including two in the red zone that could have given Miami much needed momentum. As great as the first 5 minutes of the game were, I would love to forget the last 55. I sat in the rain in Sun Life Stadium until the final whistle and will remain loyal as always, but this loss was tough to swallow. Miami is sadly no longer in control of the ACC Coastal.

My day of picks began with a 2-1 start, including Auburn's domination of Tennessee. It was only 3pm and I was able to celebrate a Golden Pick victory, moving my most important record to 7-4 on the season. Surely this would be the start of a great day of college football. By the time I entered the stadium, I had lost three straight games and was now 2-4 on the day. My confidence was still high with five picks left on Saturday night and I expected Miami to help me bounce back. By the time the game ended and I walked back to the car, wet and depressed, I was looking good in three games and held leads in each late in the fourth quarter. One by one, each one of my teams unraveled. After Arizona lost to UCLA late on Saturday night, the disaster scenario was complete. I had lost eight consecutive games to finish at 2-9 on the day.

I'll start by saying that I have complete confidence in Al Golden and know he is the right coach to lead the Hurricanes back to national prominence. That being said, fans have a right to be disappointed by Miami's performance on Saturday night. OC James Coley struggled at times and part of that is likely due to the loss of Duke Johnson. I hope Gus Edwards is a great player at Miami down the road, but he simply doesn't look ready to contribute against good opponents. Dallas Crawford needs to get every carry on 3rd or 4th and short for the rest of the season. In addition, I can only assume every defensive coordinator in the ACC knows what play Miami is running when Malcolm Lewis lines up as the only WR. Virginia Tech stacked the box in every one of those situations and made it nearly impossible to run the ball. From my vantage point in the stands, it certainly seems like Lewis only comes onto the field for running plays, then comes out for passing plays. If anyone has stats or analysis on this I would love to see it.

Miami's defense certainly looked like an improved unit early this season. More turnovers created and more sacks had fans excited about where this team was headed. In recent weeks, the Canes simply haven't been able to get off the field on third downs. On Saturday night, VT QB Logan Thomas was 25-31 for 366 yards. After turning the ball over four times each in losses to BC and Duke, Thomas didn't have a turnover against Miami. The Canes have allowed at least 297 yards passing in four straight ACC games. Whatever DC Mark D'Onofrio has been dialing up clearly hasn't been effective enough against quality opponents. I've watched Logan Thomas struggle for years, often forcing the ball when he shouldn't into tight windows. My biggest frustration from the VaTech game was how consistently WIDE OPEN the Hokies' players were, especially on obvious passing downs. Our zone coverage schemes aren't working. When we went man-to-man, VT consistently exploited our linebackers in coverage. I'm not sure what the answer is, but this coaching staff needs to come up with a better gameplan to help save this season at Duke. I realize poor tackling was a huge issue on Saturday, but at times it seemed like the Canes were either going for a big hit or a strip when a secure tackle would've been just as valuable. Thankfully, better recruiting like we are seeing this season should help fix some of these problems in the coming years. In the meantime, the defensive gameplan needs to change to fit our personnel. I would rather take chances by blitzing more often and risk being vulnerable deep instead of letting teams slowly, but consistently move the chains on 3rd down.

I picked Mike London and Virginia. I have been bashing London all season and have consistently picked against UVA. For whatever reason, I decided to trust the Cavs and doubted UNC without Bryn Renner. I picked against Nick Saban and the juggernaut that is Alabama football. I relied on Tommy Rees and Rich Rodriguez. Clearly hindsight is 20-20, but losing eight straight games makes me question every past and future decision.

The Frustrations of Defeat

In the last two weeks, the mood among Miami fans has changed dramatically. While Virginia Tech clearly was the better team on Saturday, Miami's players were still giving maximum effort throughout. I understand the frustration of losing, but was disappointed by the responses of some fans in the stadium on Saturday night. If you want to boo Al Golden's decision to punt or yell and scream about a bad call by a referee, by all means do so. I will never ever understand the fans that were booing Stephen Morris and the Canes offense. After each incompletion he threw, he heard groans and boos. I realize that the starting quarterback is always the easiest target for fans, but Morris actually played very well against the Hokies. He was hurt by a crucial drop by Herb Waters that would've cut the lead to seven in the third quarter. He showed some toughness by scrambling for a first down on a critical 4th and 4 on that same drive. Miami's offense could have played better, but it is tough to overcome three turnovers on special teams. Miami's players have been through a lot the past three years and those who are contributing now, either stuck with the program during hard times or decided to believe in Coach Golden despite negative recruiting from his competitors. I hope fans show seniors like Morris, Hurns, Green, and Linder the respect they deserve when they are honored in the last home game of their careers against Virginia.

The text messages, emails, and comments came at me all night. Readers knew how frustrated I was with my terrible week of picks. I worked hard all season to maintain a winning percentage of 55% and was ten games over .500 coming into this week. After going 3-11, I am now stuck in the dreaded area of mediocrity. I now need a solid week to avoid dealing with the possibility of a losing season. If I manage to stay above 50%, I'll declare myself eligible for bowl season and will pick games throughout December and January. I have to stay confident and focused. Thankfully, my 7-4 Golden Pick record is at least something to hang my hat on.

"The true test of a man's character is what he does when no one is watching."

The bandwagon is now likely empty. Miami was ranked in the Top Ten for one week, but many fans have lost faith in this team. The ACC Coastal title was the main goal for the Canes all season. Now, Miami must win their last three ACC games and hope for a Virginia Tech loss along the way. While the Canes can't control what happens to the Hokies, these last three games are certainly all winnable. Duke is hot and is playing with a lot of confidence. The Blue Devils have their own aspirations of a trip to Charlotte in December. Miami must refocus and play with energy and passion on the road. I remain optimistic about our chances to win in Durham, but Miami's players must show the ability to be self motivated. Al Golden will preach to his team all week about the importance of getting back on a track with a win Saturday.

There are so many things the 2013 Hurricanes can still achieve. Miami fans, myself included, have been spoiled over time by huge success and national championships. The reality is that Miami hasn't won 10 games in a season since 2003. Miami hasn't won a bowl game since 2006. Both of these negative trends can be put to rest this year. The Canes have the talent and ability to finish the season 10-2. Even without a loss by Virginia Tech, the Canes can still find their way into a marquee bowl game. Saturday's game at Duke is an opportunity to show the nation that the Canes can respond to adversity. Mature and motivated teams would come out angry against Duke and send a message. It is time for this team to bounce back. Remember where we have been and continue to support this team.

After my hot start to the season, people were tweeting at me or emailing me to try to get my picks earlier in the week. When you are hot, everyone follows and wants to be a part of it. After my awful week and return to mediocrity, a bandwagon that was once full, is now empty. My Golden Picks are still well respected, but my weeknight picks will continue to be questioned and mocked when unsuccessful. I could’ve chosen to simply avoid mentioning my stats in this week’s articles, but I promised full transparency. There are still four weeks left before bowl season and I must find a way to get back to my winning ways. My road back to prominence begins with a conference I know well – the MAC. Spend your Tuesdays and Wednesdays with the MAC as I try to gain some much needed positive momentum. Follow me @JPickens15 for "decent" college football picks and continued Miami positivity. 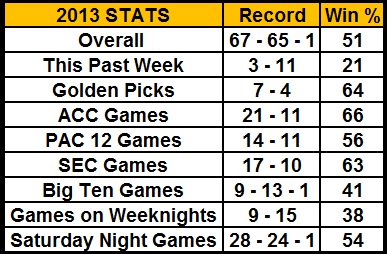 Everyone is talking about Northern Illinois and focusing on the chances of another BCS bowl bid. QB Jordan Lynch is putting up huge numbers once again and the Huskies average more than 300 yards rushing a game. Northern Illinois has all the pressure, playing at home with the #15 ranking next to their name. The NIU defense hasn't been great this season and can be exploited. Ball State has quietly put together an 8-1 season, led by veteran QB Keith Wenning, who has 27 TD and just 5 INT in 2013. WR Willie Snead has been a game breaker for the Cardinals and I expect a few big plays from him on Wednesday night. This game will be a shootout and the team with the ball last will earn a close victory. Ball State has come close to beating Northern Illinois in recent years and won't be intimidated. Expect some fireworks.

Let me know your thoughts on this article. I would love to hear feedback on some of the topics that are addressed. Go Canes.