Undaunted by their season-opening loss to St. Francis (N.Y.), the 'Canes showed some fortitude in squeaking one out against the Georgia Southern Eagles.

It wasn't easy, but the 'Canes rallied to pull out a see-saw game. Donnavan Kirk had another stellar game for Miami - and his 2nd consecutive double-double. Kirk was one of five 'Canes scoring in double figures,

Miami got off to a slow start, but as the game went on, the 'Canes picked up their offensive attack and carried a slim 3-pt lead into the half. Rion Brown and Garrius Adams struggled from the field, but they were relentless attacking the hoop which led to a bunch of much-needed free throws.

After building a 10-point lead in the second half over the Eagles, Georgia Southern guard Jelani Hewitt (27pts) shot his team back into it in a hurry.

JUCO transfer James Kelly (10pts) displayed a variety of solid post moves. Davon Reed struggled from the field at times, but his big 3-ball from the corner cut a 5 point Miami deficit to 2 late in the game. Manu Lecomte was more efficient than in his first game and his big steal just before the end of regulation was HUGE. 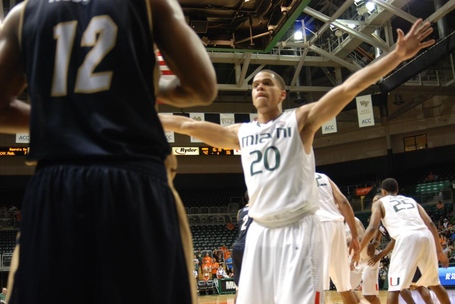 Rion Brown and Garrius Adams logged a ton of minutes, and this has to be a cause for concern going forward. With an already depleted roster (especially concerning scoring options), the senior guards are going to be asked to carry a lot of the load. This may become more of a concern later in the season when fatigue tends to set in earlier each game.

The Good: 'Canes notched their first win of the season. It was good to see a balanced offensive performance.

The Bad: The stands were very empty.

The Ugly: Early on the 'Canes offense looked real ugly. Georgia Southern seemed to be able to drive the lane and finish easy buckets all game long.

The Bottom Line: It's going to be exciting - and frustrating - to watch the 'Canes this year. The team is going to go through growing pains, but the end result of these trials and tribulations will help the 'Canes once conference play begins.